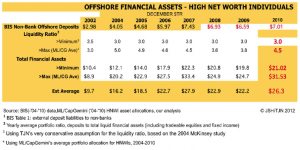 As I noted earlier, the Tax Justice Network just released a study showing that there is somewhere between $21 and 32$ Trillion that tax cheats have hidden in tax havens. Really obscenely rich people like Mitt Romney make up for $9.8 trillion of that–or about 18% of the total liquid net worth in the world, hidden away in tax havens.

But there are two other tables from the study that bear notice. The study suggests that the money stashed in tax havens has been growing steadily at a rate of 16% a year.

Our analysis finds that at the end of 2010 the Top 50 private banks alone collectively managed more than $12.1 trillion in cross-­‐border invested assets for private clients, including their trusts and foundations. This is up from $5.4 trillion in 2005, representing an average annual growth rate of more than 16%. 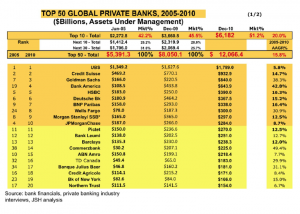 But that’s sort of misleading. As the table above makes clear, the amount in tax havens grew by 67% between 2002 and 2004, then grew by 40% in the following two years, then by another 23% in the last year of the bubble. Then it crashed, basically losing that 23% and plateauing for a year. And then it started growing again, 18% between 2009 and 2010. And who knows how much in the last year?

The banksters paid a price for 2 years, but the looting has begun again.

What I find particularly interesting–though I’m not sure what to make of it–is the changing share of looter service the big banks are doing. While UBS’ tax shelter dollars continued to grow, they lost market share among tax cheats. Meanwhile Goldman Sachs’ tax shelter dollars almost quadrupled in that time. Bank of America and Wells Fargo made big gains too (though Morgan Stanley’s tax cheat business shrank and JP Morgan’s was somewhat flat.

Like I said, I don’t know what to make of it. But it sure seems like since the crash at least some of the banks have decided to recover by catering to tax cheats.

Lovely. Some of the same banks that are still in business because tax payers bailed them out are increasingly some of the biggest players in facilitating the looting of our own–and every other–country.

Update: This Title was changed.