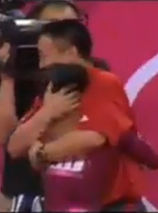 Gabby Douglas and her coach, Liang Chow, show the strength of America’s diversity.

At around mid-day, IA Congressman Steve King said the following:

“The argument that diversity is our strength has really never been backed up by logic,” King told The Huffington Post. “It’s unity is where our strength is. Our Founding Fathers understood that. Modern-day multiculturalists are defying that.”

Not long after Steve King made that ridiculous comment, Gabby Douglas–who trained in IA for the last two years–became the first African American woman (in fact, the first non-white; no Chinese women have even won this) to win the gymnastics all-around gold.

The best gymnast in the world.

This evening, Chuck Grassley did what every other member of Congress has been doing during the Olympics: bragging about athletes to whom they can claim any ties. (All Chuckisms original)

Congrats to GabbyDouglas for GOLD in g ymnastics. She a Virginian But she came to Iowa to live to train. I bleve like Shawn johnson

Gabby moved to IA, of course, so she could train with Chinese immigrant Liang Chow, who first moved to IA to coach University of IA’s gymnasts in 1991 and became a citizen in 2002. Gabby is the second young woman Chow has trained to Gold in Grassley and King’s state (he coached Shawn Johnsen as well).

Today, the US is the best in the world, at least for one glorious Olympic event. And we owe that strength precisely to our diversity.

I suppose Steve King wants to give that medal back?

Update: See also this great post oln how hard Gabby’s mom worked to make this possible for her. It really conveys how inaccessible these expensive sports can be to potentially elite athletes because of economics.