“With A Neck Like a Jockey’s Bollocks” Trash Talk

Yeah, about the title. No, I am not quite sure what it means. Maybe Marcy and other sundry mystery guests will be along to explain the damn thing.

What I can confirm is that it is unequivocally the single most awesome grouping of words I have seen in a very long time. So I am rolling with it baybee!

And, you know, leave it to the Irish, in this case Michael Higgins, who was not then, but is now, the President of Ireland. And, also, who is, by my marker, a man of and among men. I would quote Mr. Higgins more, but it would not do him justice. Watch the video.

Honestly, sincerely, really unequivocally, whatever the fuck, just listen to Michael Higgins eviscerate the American ethos. It is brutal and real.

Oh, before we go any further, I have a new chapeau. I will, and you can, thank the one and only, ever lovely, Phred for this wondrous occurrence.

Y’all have known I had an affinity for CHEESE since I was a child in elementary school. It was easy then, as there was no NFL team within hundreds of miles, and the one that was there was the Rams, and it was not all that compelling. No, the team of my youth and dreams was Lombardi’s Packers. Fuck Dallas, Green Bay was, and is, the people’s, and America’s, team. Always has been. As the only team actually of the people, it must so be. Don’t pitch that crap about teams that are corporately owned, or owned by narcissistic dicks like Jerry Jones.

Knowing my affinity for the once, always, and future real team of America – the ONLY publicly owned and locally controlled, NFL team, the Green Bay Packers, our friend Phred has blessedly provided me with an official CheeseHead. It arrived a couple of days ago, and is the most awesome thing I have been given in a LONG time. 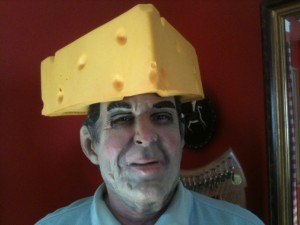 So, I raise my Ronnie Raygun like head to the Great Cheese In The Sky.

Back to Michael Higgins, necks and bollocks. Watch the video. Higgins correctly identifies the wankers in life, I love it and ratify his identification. Precisely.

Now, on to the sporting side of life. Well, normally, Marcy or I post up Trash Talk whenever we are so inclined. Sometimes, however, itinerant Roving Reporters, like Mademoiselle Rosalind, get all uppity in our grill and force us to Trash.

Oh my. The ignominy of it all.

So, without further adieu, we shall lead off with sailing. Yes, I know, this is all a bit discomfiting for the normal Trash Talk aficionados. Whatta ya gonna do Mofo? We support our own Roving Reporters here at EW. And, by the way, Rosalind ain’t no idle Roving Reporter either. Nope. Rosalind Sails the Seven Seas. Or at least those off of Oxnard the Pacific shore. Close enough for rock and roll. Rosalind wants to jaw about the America’s Cup process. Yes, yes, I was doubting at first too; but after watching her link, it is pretty awesome.

Okay, now that we have covered “Greatest Athletes of Sailing”, let us move with all due haste to NASCAR.

Hahahahhahahaha, just kidding. I’m not going to lead, even secondarily, with media shills that go round in lefthanded circles as a profession. Won’t do it. Can’t do it. Not gonna do it. But, since the Formula One Circus is on it’s mid-season month long hiatus, there is no more Fast Trash worthy of discussion.

That means, as far as active professional sports, My Bloody Valentine in Beantown, Massachusetts is about the biggest story going. And a pretty ugly story it is. You would have thought that for all the money John Henry et al. spent, they could have bought some better Lackeys. But nooooooooo. Y’all got yer teams; bring it with your talk.

It is hard to bring myself to talk about pre-season NFL. In my world, the Cards are in mid-season suckology form (seriously, no Kurt Warner, no fucking go), Peyton may not be the Peyton of old, but watch out, the Donkos are coming. But, mostly in my world, there is CHEESE. Tell us what is up in your NFL world. Unless it is the Steelers (just kidding; am trying to draw out the elusive Scribe).

Okay, that leaves the Lance Armstrong mess. I came very close to ripping hard on Lance Armstrong last night when the news of the abandonment of his defense was announced.

I made argument to Dave Zirin of the Nation and TJ Quinn of ESPN that there was no way to believe Armstrong if, unlike Roger Clemens, Armstrong was not even willing to play out the string of his potential remedies (in the legal domain, this is termed “exhausting one’s remedies”) supporting his innocence.

I am glad, largely thanks to Zirin, I did not angrily post that last night or this morning; I have reconsidered, a bit, after longer contemplation. Not by a lot, but by enough to discuss. I STILL think if you truly believe in your innocence, and/or have the balls and money to do so, you never stop saying so and defending on that line. That way, it is pack fair and square, and nobody can say you weren’t there to fight.

Don’t kid yourself, there is a qualitative difference between Roger Clemens and Barry Bonds, and Lance Armstrong. Not only were there no competent, legally admissible, positive tests for the former two (as there were none for Armstrong); there were, more importantly, and unlike with Armstrong, never, at any time, any teammates who inculpated them (and, no, sorry, Andy Pettitte did NOT do so for Clemens).

Armstrong may not have had positive lab tests, but there were a boatload of former teammates and cycling adjuncts that were ready to testify against him and that is pretty harsh as an evidentiary picture with a jury looming. What does it mean without a trial and cross-examination? I don’t know for sure, and neither do you or anybody else, because the one person who squelched that knowledge was…….Lance Armstrong. And, yeah, that does mean something to anybody that is not an apologist.

The above having been said, it is hard to argue with Armstrong’s posit that further contesting was a waste of time. The appearance is quite right that Travis Tygart and USADA had it out for Lance Armstrong and that the cause was lost, and the fix in, form the start.

The thing that sticks in my craw is, and I understand more than a little about litigation of parallel prosecution matters (remember, the Armstrong case WAS ginned up by the same ethically questionable Federal investigator, Jeff Novitzky, as plied the Bonds and Clemens cases). Anything with Jeff Novitzky involved should invite a LOT of questions, always. Jeff Novitzky is the worst kind of crusading federal menace, the out of control power mad special agent.

You have to wonder if there is not a good reason there were no meaningful convictions resulting from the Bonds, Clemens and Armstrong cases which were the linchpins of Novitzky’s persecution. A persecution which originated with the overblown BALCO cases. There is left, in the wake, a legacy of leveraged persecution and failed prosecution; the common thread of which is Jeff Novitzky. There may be something to be drawn there.

But that is what we have now. When Jeff Novitzky and the DOJ cannot get a head on a criminal stick like Roger Clemens or Lance Armstrong, they show their pettiness, in this case Novitzsky, by moving to prosecution against Armstrong by authorities without such due process niceties as actual proof beyond a reasonable doubt. The USADA, was a perfect vehicle to gut shoot and eviscerate Armstrong. Make no mistake, if Novitzky could have done that to Bonds and Clemens, he would have. It is not right.

All of the above having been stated, upon information and/or belief, it is still depressing, and instructive, that Armstrong chose to not exhaust his remedies and play out the legal string. And, again as someone who has seen the devastating and wrong results that can occur from ultra-aggressive parallel prosecutions, such as we have just seen from Novitzky, DOJ and USADA, there can be a point to where it is no longer viable to fight in the face of the onslaught.

I see no reason that Lance Armstrong is wrong in that assessment here; however, his legal team had already worked up the defense. There would NOT have been all that much more legal expense necessary to expend to play out the string.

There was, however, a LOT of embarrassment in the form of ten or more former teammates and/or doctors formally testifying against him. That would have been even more devastating to Lance Armstrong, Inc. And that is why Lance pulled the escape hatch lever when and where he did. You cannot blame him, but you sure as hell cannot exculpate him, it is an effective legal admission.

By doing as he did, Lance Armstrong has insured that he will remain a duality in the sporting conscience – both the persecuted innocent and the epitome of cowardly guilty – both at the same time. Curiously, I kind of bite off on both as being valid. Neither may be individually right; neither will likely ever be proven wrong. So be it, and let the record so, conflictingly, reflect. The one thing you will never take away from Armstrong is what he has done to fight cancer. That sticks, and this may have been the best path for Armstrong to continue his work. If so, then it was a fair call for him to make.

Well folks, that is Trash for today. I am sure there is more (hey, if ya got some Little League world Series shit, bring it). Maybe you are in to polo, water polo or, ugh, soccer; whatever, if you want to yammer, this is your forum.

Rip This Fucking Joint!! (Oh, hey, is Bobby Keys one badass blowing bitch on the sax or what??)