Deadly Isaac Was at 2008 Republican Convention 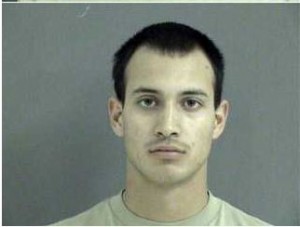 No, not Tropical Storm Isaac, which is expected to become a hurricane later today and hit New Orleans late tonight or tomorrow morning as the Republican National Convention parties on in Tampa. This Isaac is Isaac Aguigui, whom prosecutors in southeast Georgia identify as the ringleader of a militia formed among soldiers stationed at Fort Stewart who had big plans for assassinations and bombings, even including a plan to kill President Obama. Three other active duty soldiers along with Aguigui initially were indicted by the Army for the deaths of a former soldier and his girlfriend last December. Gawker discovered yesterday that an Isaac Aguigui is shown in this Reuters photo from the 2008 Republican National Convention in Minneapolis, where Reuters identifies Aguigui as a page.

Here is how AP’s Russ Bynum described the plot:

“This domestic terrorist organization did not simply plan and talk,” prosecutor Isabel Pauley told a Superior Court judge. “Prior to the murders in this case, the group took action. Evidence shows the group possessed the knowledge, means and motive to carry out their plans.”

The prosecutor said the militia group had big plans. It plotted to take over Fort Stewart by seizing its ammunition control point and talked of bombing the Forsyth Park fountain in nearby Savannah, she said. In Washington state, she added, the group plotted to bomb a dam and poison the state’s apple crop. Ultimately, prosecutors said, the militia’s goal was to overthrow the government and assassinate the president.

It appears that the murder victims, former soldier Michael Roark and his girlfriend, Tiffany York (the Daily Mail has their photographs), were killed because Aguigui viewed them as “loose ends” as Roark was in the process of leaving the military but had been a part of the militia group.

Aguigui funded the group with an insurance settlement coming from the death of his pregnant wife under highly suspicious circumstances. Also from Bynum’s article:

Pauley said Aguigui funded the militia using $500,000 in insurance and benefit payments from the death of his pregnant wife a year ago. Aguigui was not charged in his wife’s death, but Pauley told the judge her death was “highly suspicious.”

She said Aguigui used the money to buy $87,000 worth of semiautomatic assault rifles, other guns and bomb components that were recovered from the accused soldiers’ homes and from a storage locker. He also used the insurance payments to buy land for his militia group in Washington state, Pauley said.

Here is Gawker on their find of the photo of Aguigui at the 2008 Republican National Convention:

Of course, there could be two Isaac Aguiguis who look startlingly alike.

I wonder how many future terrorists are at this year’s Republican National Convention in Tampa.