Did the CIA Agents in Mexico Shoot at Their Pursuers? 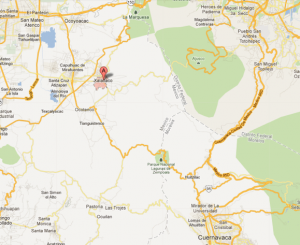 The NYT’s story on the CIA officers shot at in Mexico–and possibly the WaPo one as well–appear to be partly a response to the publication of the CIA connection in Mexico’s lefty La Jornada, which published a series of stories on the event yesterday.  But there are details in those stories not treated in the US stories I’ve seen–details that increase my questions about whether the CIA guys shot at their pursuers.

The NYT, for example, repeats the Mexico Navy’s clarification of its original release that their captain wasn’t actually driving the car, but was sitting in the back seat.

The Mexican Navy said Tuesday in a statement that an American was driving the vehicle and that during the attack the captain, who was handling logistics and translating for the men, remained in the back seat calling for help on his cellphone.

The men were wounded, the Navy said, when the rain of bullets managed to tear through the car’s protective armor.

This appears to be an attempt to answer how the Americans got hurt inside a bullet proof car. But it actually presents more problems than it answers. The pictures of the Land Cruiser show three main kinds of bullet damage to the car: the tires appear to have been shot out (and something may have happened to the back right wheel), at least four bullets hit–and may have pierced–the rear window of the vehicle, and a ton of shots hit–but don’t appear to have pierced–the passenger window. But there appears to be less damage to the driver side, mostly bullets in the steel. Did the bullets enter the rear window and go past the Mexican captain to injure Americans in the front seat? And how do such shots injure people in the leg and stomach–through the steel doors? Remember, too, that some reports say 30 bullets hit the car, but 60 shell casings were found at the scene.

Which is why I find it interesting that Mexico’s Attorney General is asking the Federales for the guns used in the attack.

Though of course if they were really training the Navy on shooting, it’d be more likely that they were JSOC or retired JSOC, which might explain why all these stories came out saying they’re CIA, which is bad, but still not as bad as active duty military would be.

Incidentally, in one of La Jornada’s stories, a Labor Party Senator, Ricardo Monreal bitches not only that Felipe Calderón lets the Americans fly drones in Mexico, but also that he allows US agents to be armed in the country.

And if the Americans–or the Mexican captain, now sitting in the backseat–did return fire, then it might explain another detail reported by La Jornada.

The paper reports that there were actually 18 police involved in the attack, not just the 12 in custody; there was an initial group of police in civilian clothes, and then a later group in uniform, who ultimately stopped the attack (family members of some of the men in custody say they were among the later, uniformed group). More interesting, three of the five (civilian) cars used in the attack are reportedly not in the custody of the Attorney General conducting the investigation. Is there evidence on those cars–such as bullet marks of their own–that somebody in Mexico or the US would like to bury?

Also note, the same article says that when the uniformed police showed up one of the agents yelled out that they were diplomats traveling with a Navy guy, which is what stopped the shooting. Uh, during a gun battle? Yelled? And in what language, given that the Navy captain was purportedly their translator (even the one attached to the US embassy in Mexico)? Did he open the door to yell?

All that’s assuming these guys are really fancy shooting instructors, though. One of La Jornada’s stories reports both that the kind of training these men were doing has been going on since the last Administration (presumably meaning the Fox Administration, which ended in 2006), but also that they’ve been engaged in it just since last Tuesday (remember, one of the two agents is not based in Mexico and was just here on a special assignment, so that’s possible).

Then there’s the question of where the Americans were headed. La Jornada–and the original Navy release–say they were headed to a training camp in Xalatlaco, which is marked on the map above. The fight took place close to the town of Huitzilac, as the Americans were pulling into a dirt road, where the police said they were hunting kidnappers. Except reports say the Americans were coming from Mexico City. It seems like it would only make sense to go through Huitzilac and Tres Marías to get to Xalatlaco if you were coming from Cuernavaca–there are more direct routes from Mexico City. As I noted, there was a shoot out in Cuernavaca the night before this attack, and the CIA agents were originally taken there, only later to be taken to a Navy hospital in Mexico City and then brought back to the States, so it would be interesting if they were coming from Cuernavaca.

Finally, there’s this. La Jornada includes this story in their package on the shooting, without an explanation of what it has to do with the shooting. It talks about the cooperation and intelligence sharing between the US and Mexico on law enforcement–including drugs and money laundering. But it also focuses on US participation in interrogations. And it notes that both the Mexican Navy (in whose company the CIA agents were traveling) and the Attorney General (who is investigating the shooting) conduct such information sharing. Among the two notable cases of cooperation the article discusses is this one, in which the Navy captured a guy they believed to be El Chapo Guzman’s son, but who turned out to be a used car dealer.

After working months with U.S. intelligence, the Mexican navy said it believed it had nabbed a big prize in a known Guadalajara narco-haven: the son of Mexico’s top fugitive drug lord.

But it turned out they got the wrong man.

The man arrested Thursday as the presumed son of Joaquin “El Chapo” Guzman is really Felix Beltran Leon, 23, and not Alfredo Guzman Salazar, as the Mexican Navy had presented him, the Attorney General’s Office said Friday.

Mexico and the US blamed each other for the faulty intelligence.

The Attorney General’s Office issued a statement earlier Friday saying the original information on his identity came from the United States.

“The Mexican Navy and Mexican law enforcement have said this is El Chapo’s son and that’s what we took,” said DEA spokesman Rusty Payne, noting that the DEA is working separately to confirm the man’s identity.

Now, the article may be entirely unrelated, or it may imply there’s a tie they can’t confirm between this earlier botched operation and the shooting last week.

As the WaPo reported yesterday, one of the guys in the incident, Stan Dove Boss had a post office box in the same facility as a guy involved in renditions. And the Federales claimed they were investigating a kidnapping, which si another name for capture and interrogation, particularly of the kind we’ve been doing in the last decade.

Were these guys in Mexico for shooting lessons, or interrogations?

Update: In addition to all the reasons why the Mexicans and Americans would have for hiding whatever these spooks were doing in Mexico, there’s also the recent example of the DEA-related shooting in Honduras. A report released earlier this month makes it clear our government has been lying its ass off about what went on in the May 11 shooting.