Now that Ramadan is over, General John Allen and the rest of NATO will have to come up with additional explanations for why the rate of green on blue deaths is accelerating so rapidly. Besides the recent discussion of Taliban infiltration and Taliban coercion, another explanation that seems to be hinted at fairly often is that the attacks are going up because we are training more and more Afghan forces.

This explanation is offered outright by Peter Bergen in this CNN story:

Another likely cause of the increase in the number of green-on-blue incidents is straightforward: In the past two years the size of the Afghan army and police force has almost doubled from around 200,000 to around 350,000.

This explanation also was hinted at by Afghanistan’s Army Chief of Staff, General Mohammad Karimi:

Karimi said Afghanistan would also reinforce a vetting procedure that had never been properly employed, allowing cursory or no background checks for new recruits.

A number of the attacks this year were carried out by individuals who faced little scrutiny in getting access to joint U.S. and Afghan bases. This month, an unvetted 15-year-old “tea boy” who had been living on a police base in Helmand province killed three U.S. Marines while they exercised.

“We had a policy for recruiting from Day One, but it hasn’t been implemented. We needed too many people,” Karimi said. “When you need 12,000 people each month — it’s a number so high that we couldn’t implement the policy,”

In order to test this hypothesis, I collected the number of green on blue killings over the years from this database developed by Long War Journal. The data had to be updated yesterday to reflect another three deaths. For Afghan force size, I relied on this database from Brookings (pdf). In order to have annual rates for comparison, this year’s 45 deaths over eight months was adjusted to an annual rate of 67 projected over 12 months.

The number of deaths per year was then adjusted to reflect the annual number of green on blue deaths per 100,000 Afghan security force members. In table form:

These results are even more striking in graphical form: 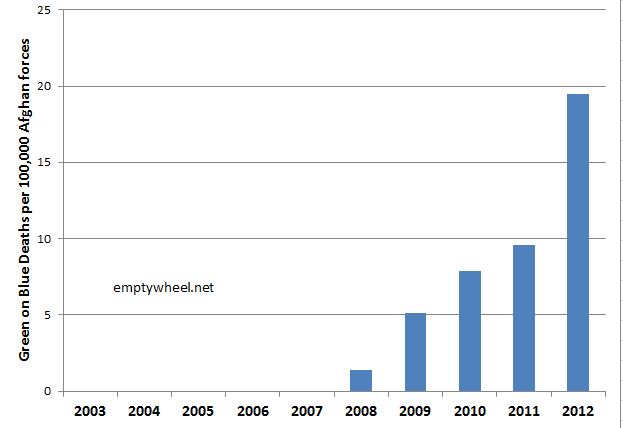 NATO force size also has changed over the years as well. I was unable to find a reference with a table of total NATO force size over the years, so I had to rely on this New York Times reference for US deployment levels through late 2009, this article for 2010 and 2011, and finally this reference for current levels. Taking the numbers above and then adjusting the death rates per 100,000 US troops deployed gives numbers of 0.4, 3.5, 7.9, 9.1 and 16.4 for 2008 through 2012, respectively, giving essentially the same trend as seen when not adjusted for US troop strength.

Note that although the US invaded Afghanistan in 2001, and “training” of Afghan forces began as early as 2003, no green on blue deaths are reported before 2008.

NATO will have to find another explanation besides the rapid expansion of Afghan forces to account for why green on blue deaths have increased so dramatically.