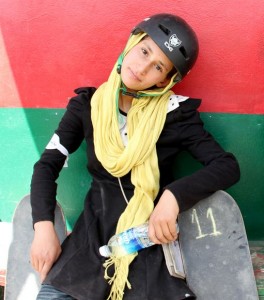 Haunting photo of Korshid, age 14, from the Skateistan.org website. Korshid and her 8 year old sister were among the four Skateistan victims in Saturday’s bombing. The Washington Post tells us Korshid translates as “radiant sun”.

It was probably easy to overlook the suicide bomb attack in Kabul back on Saturday. The bomber appeared to have been stopped short of the target of ISAF headquarters and the death toll was initially reported at six, a relatively low number killed in such a violent location. But even that first report hinted at deeper tragedy, as the bomber was suggested to have been a teenager and the victims were said to include “child hawkers”.

Unlike most of the Afghan victims of this war who usually go nameless and faceless, however, four of the nine victims in this blast were participants in Skateistan, a remarkable program that provides a safe haven for street children in Kabul and gives them the opportunity to  pursue a pastime and to interact across traditional ethnic and gender barriers. From Skateistan’s self-description:

Skateistan began as a Kabul-based Afghan NGO (Non-Governmental Organization) and is now an International non-profit charity providing skateboarding and educational programming in Afghanistan, Cambodia and Pakistan. Skateistan is non-political, independent, and inclusive of all ethnicities, religions and social backgrounds.

We learn from the Washington Post that the Skateistan members and the bomber confronted one another as the tragedy unfolded:

On Saturday, the forces of progressive and regressive Afghanistan collided on a street that houses embassies, intelligence services and other foreign outposts. An intruder — a boy of 14 or 15, carrying a backpack — made his way onto the turf held by the scrappy Skateistan crew.

The Taliban later asserted responsibility for dispatching the bomber, but claimed that he was much older. Kabul police said Thursday that they believe he was almost 16, but they did not release his identity and had not determined his target.

Accounts vary about what happened that morning, but by most tellings there was an altercation. The street children thought the boy was horning in on their vending business. During the ensuing tussle, he detonated his explosives — about 150 feet from the blast-wall-protected headquarters of the NATO-backed International Security Assistance Force.

When it was over, Korshid, age 14 and pictured above, and her sister, Parwana, who was 8, were dead along with fellow Skateistan members Nawab, who was 17, and Mohammed Eeza, who was 13.  Skateistan posted a moving tribute to these victims. Recent video footage of Korshid on her board is in this BBC story on the deaths.

Skateistan has produced two feature-length movies on their remarkable program. Below is the trailer for the first movie. In a very sadly poignant moment of the trailer, beginning around the 2:05 mark, Sharna Nolan notes “People in other countries can see that these kids don’t all want to strap explosives to themselves”. Sadly, the Taliban continues to find children they can coerce into these tragic attacks. Perhaps some day programs like Skateistan can win out and those who would wreak havoc can find no more volunteers or coercion victims to wear the bombs.