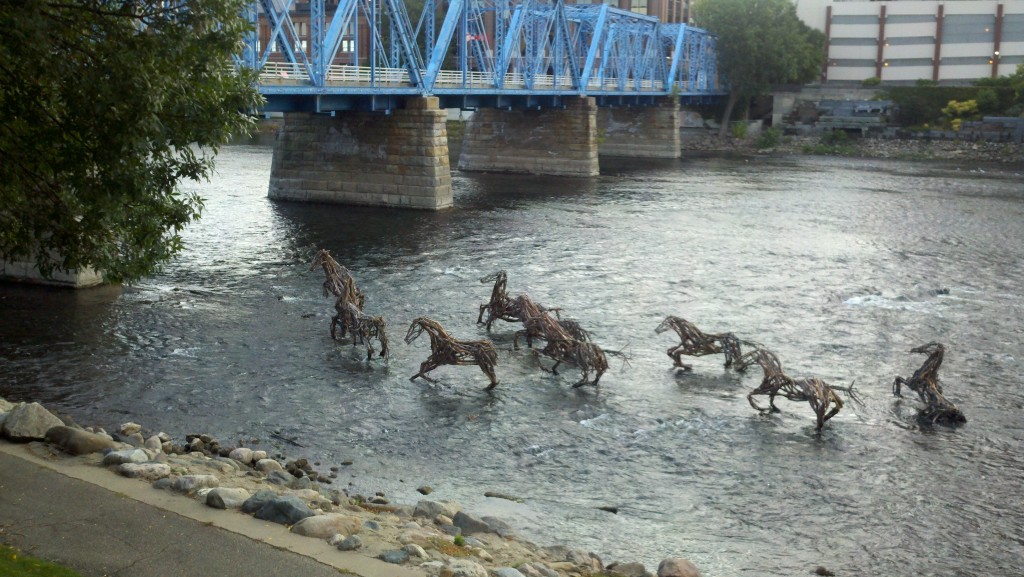 Art Prize is an event put together by Dick DeVos’ son, Rick, as an alternative to yet another film festival. It’s a large open entry contest in which the prizes are awarded by popular vote (this year, there will be juried prizes as well). It’s good at bringing lots of people downtown–including busloads and busloads of kids–generating some excitement, and … getting people to look at “art.”

Given the open entry, there is a very wide range of quality in the art work. And since the voting system is popular, there’s a lot of catering to popular tastes–or those of the area. (For example, patriotic and religious artworks tend to do really well; a mosaic altarpiece won the top prize last year).

I’ve decided I’m going to blog some on Art Prize some this year because I’m fascinated by a truly popular art event.

One of my favorite things about Art Prize is the way even pedestrian works can accomplish one purpose of art, to get people to look at the space around them differently.

Take the horses, above, which are in the Grand River just outside of the Public (municipal history) Museum and Grand Valley State, right in the middle of downtown. While each horse is supported by a vertical metal bar, they’re otherwise constructed of branches.

The rapids in our city’s name are no longer worthy of the name; instead, a series of small drops step the river down the 18 feet it falls through the city. And many of the fish that draw crowds of fishermen to the banks of downtown year-round are farmed. It’s pretty tame, particularly given how low it is this year with the drought.

Nevertheless, you still see wild things in it, particularly herons shopping for dinner in the morning hours, these majestic birds lording over a pretty urban environment. 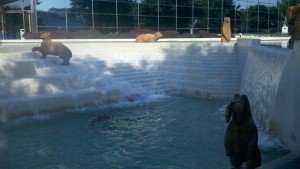 So I like these horses for the way they put the wild back into the Grand. They also pick up a heavy horse theme from the works at the Meijer Gardens, notably the American Horse, which lots of Grand Rapids people would be familiar with. And in the Public Museum, pretty much jutting into the river a little to the left of the blue bridge, is a round glass-walled room housing an old Carousel of horses. So while the horses won’t win any prize for the sheer artistry of the work, I suspect they’ll get people thinking about the river itself.

We’ll see how the kids respond to it when they show up tomorrow. I do know that this piece–quite literally just a bunch of chainsaw sculpted logs shaped as fishing bears put in a fountain behind the Ford museum–was a top ten hit last year, presumably because it was in a very central location,  it was so accessible to all ages, and it was a brilliant use of the existing fountain.

I expect the pack of wild horses in the rather tame Grand achieve a similar effect this year.