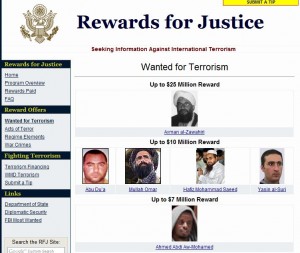 In an act undertaken without any apparent awareness of its inherent hypocrisy, the US also has criticized Bilour’s bounty:

The State Department weighed in Sunday, with an official recalling that US President Barack Obama and Secretary of State Hillary Clinton “have both said the video at the core of this is offensive, disgusting, and reprehensible.

The official added: “But that is no justification for violence and it is important for responsible leaders to stand up and speak out against violence.” Therefore we find Mr. Bilour’s announcement is inflammatory and inappropriate,” the official said in a statement.

The US condemned a $100,000 bounty on one person, while at the same time maintaining a website promoting multimillion dollar bounties on a number of people. Administered through the same Department of State that issued the condemnation of Bilour, the Rewards for Justice program (diplomacy in action!) describes itself in this way:

The Rewards for Justice program continues to be one of the most valuable U.S. Government assets in the fight against international terrorism. Established by the 1984 Act to Combat International Terrorism, Public Law 98-533, the Program is administered by the U.S. Department of State’s Bureau of Diplomatic Security.

Under this program, the Secretary of State may authorize rewards for information that leads to the arrest or conviction of anyone who plans, commits, or attempts international terrorist acts against U.S. persons or property, that prevents such acts from occurring in the first place, that leads to the location of a key terrorist leader, or that disrupts terrorism financing.

The Secretary is authorized to pay a reward greater than $25 million if he/she determines that a greater amount is necessary to combat terrorism or to defend the United States against terrorist acts.

Since the inception of the Rewards for Justice program in 1984, the United States Government has paid more than $100 million to over 70 people who provided actionable information that put terrorists behind bars or prevented acts of international terrorism worldwide. The program played a significant role in the arrest of international terrorist Ramzi Yousef, who was convicted in the 1993 bombing of the World Trade Center.

And just in case you try to argue that this program is only aimed at arresting suspects and bringing them to trial, keep in mind that Osama bin Laden also was listed at this site with a $25 million bounty. There was discussion after his execution on whether reward money would be paid out:

Under a special program started by Congress back in 1984, the U.S. government has paid $100 million to dozens of people who helped bring international terrorists to justice. But the reward for the most notorious terrorist of all — Osama bin Laden — could go unclaimed.

At a news briefing, Secretary of State Hillary Clinton was circumspect about the case.

“Given the importance of confidentiality to the Rewards for Justice program, I cannot comment at all on whether anyone has been nominated for a reward in this or any other case,” she told reporters.

The biggest difference I can find between Bilour’s bounty and the Rewards for Justice program is that no representative of the US government has stepped forward and offered to be prosecuted for soliciting violence.