I Don’t Think Luddite Means What CNN Thinks It Means 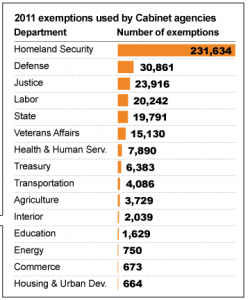 CNN’s Security Clearance blog thinks it has exposed Janet Napolitano as a Luddite.

Napolitano said she does not use email “at all.”

“For a whole host of reasons. So, I don’t have any of my own accounts and that, you know, I’m very secure,” Napolitano noted at a Washington conference about cyber security.

“Some would call me a Luddite but you know. But that’s my own personal choice and I’m very unique in that regard I suspect,” Napolitano added.

Of course, she’s not unique at all and–given her fondness for highly sophisticated data mining–not a Luddite.

CNN might consider two things before they conclude Napolitano doesn’t have email because she eschews technology. First, the graphic above, which Bloomberg put together to show how unresponsive Obama’s Administration is to FOIA requests. Part of the reason why DHS claims so many FOIA exemptions is the sheer number of FOIAs they get. But there have been other examples to show that Napolitano’s agency doesn’t much like transparency.

And then consider why other people who don’t use–or claim not to use–email did so. People like Scooter Libby, whose office also happened to disappear a good number of emails responsive to a criminal investigation. The most logical explanation for someone–particularly someone who avoids transparency in general–to avoid email is because it is FOIAable, it serves as a record of discussions that might be embarrassing.

So my guess is that one of the main reasons why Napolitano doesn’t use email is to avoid getting into trouble with it.

After all, like Scooter Libby, she knows as well as anyone the kinds of things the government and others can find in someone’s email box.