Winter™ — Property of The Weather Channel® 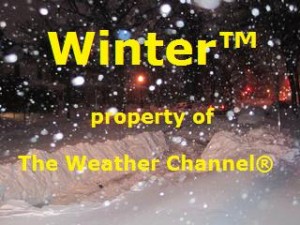 Bet you didn’t think that natural disasters could be co-opted, branded, and marketed!

Let’s follow the money behind this brave new branding program. Not only does NBCUniversal (owned jointly by Comcast and GE) and The Blackstone Group own The Weather Channel—so does Bain Capital.

Will these corporations sue every non-NBC network and news outlet that uses these The Weather Channel-generated storm names? Or will they insist that every entity using these names provide free promotion of The Weather Channel by way of attribution?

Surely you can see it now, at the bottom of every local weather report: This storm name brought to you by The Weather Channel®.

Let’s also look at the holdings of GE, Blackstone, and Bain, to see how they might benefit from this nifty new naming nexus.

GE may own business involved in wind energy production, but it’s been invested for decades in traditional energy and transportation businesses, all of which rely on fossil fuels.

And then there’s Bain; its holdings make it more like NBCUniversal’s joint venture owner Comcast, in that it owns communications outlets Clear Channel. How nifty that weather reports on Clear Channel might disseminate the branded winter storm names!

In other words, these corporations could own and resell the names of the storms spawned by increasingly volatile climate, created by their other climate changing activities—uh, profit centers.

Welcome to the vertical integration of climate change.

Enjoy it while you can for free; any time now the corporate suits will figure out how to monetize this brand, Climate Change™, property of The Weather Channel®. Then you’ll have to pay for licensing or provide attribution before you can discuss it.