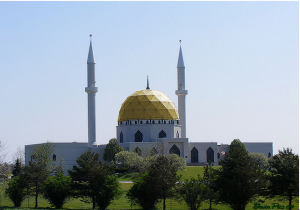 If you’ve ever driven north on I-75 into the Toledo area, you’ve surely seen the magnificent white building seemingly arising out of the farmland at the juncture with I-475. It’s not just a gorgeous mosque, it’s one of the landmark buildings in the Toledo area. It’s just as much a part of the city as the Jeep factories or the water.

And some asshole set it on fire on September 30, another in the series of arsons targeting Muslim houses of worship this year.

“We’re actually reeling in disbelief,” Dr. Mahjabeen Islam, president of the Islamic Center of Toledo in Ohio, told Hatewatch today in describing the devastation caused by a fire deliberately set in the mosque’s prayer area on Sunday afternoon, just minutes after worshippers had left the building.

“This is a hate crime and it’s very significant it was started in the center of the prayer area, right under the dome,” said Islam. The mosque she heads is the third largest in the United States, a 70,000-square foot landmark, visible for miles, with 3,000 members who will celebrate the center’s 32nd anniversary on Friday.

The fire and water damage from sprinklers touched every room in the Islamic Center, causing an estimated $1 million to $1.5 million in damages. Repairs will take an estimated six months.

A suspect in the arson, whose image was captured on surveillance cameras, was arrested Tuesday in neighboring Indiana. On Wednesday, Randy T. Linn, a 52-year-old truck driver from St. Joe, Ind., was charged in Perrysburg, Ohio, Municipal Court with two counts of aggravated arson, aggravated burglary, and carrying a concealed weapon, the Toledo Blade reported in today’s editions.

I know all these hate crimes are senseless. But this one hits home. I don’t care what faith–or no faith–you are: this is one of those religious buildings that inspires awe. And to try to intimidate the people who built such a monument is just vile.