Food Trucks: The Next Terrorist Threat 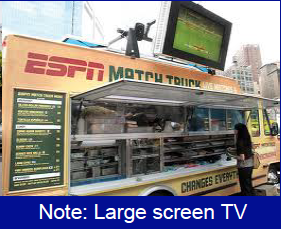 In a fit of fearmongering reminiscent of the Mobile Bioweapons Labs used to get us into the Iraq War, FDNY did a report last month warning about the use of food trucks by terrorists. (Via Government Security News, h/t G.W.Schulz) The chief worry seems to be that food trucks carry 20 pound propane cylinders, get close to important landmarks, and would serve as an easy surveillance platform.

But some of the other things the report warns about are the fact that “roach coaches” are increasingly being replaced by gourmet carts and ESPN’s food cart has a large screen TV.

Apparently, in addition to Ford being a suspected terrorist, ESPN is now a suspected front for a terrorist surveillance operation, complete with large screen TV showing sports? 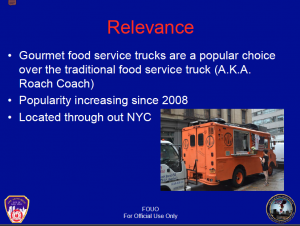 The thing is, in addition to threatening burgeoning small business growth, this fearmongering presents another problem: the last two real terrorist plots in NYC.

As Schulz pointed out, the guy who thwarted Faisal Shahzad’s attempt to blow up Times Square was street vendor Duane Jackson, not the NYPD, which was instead busy profiling Muslim-owned businesses rather than the 7-11 that might have led to Shahzad’s hawala. And while Jackson’s handbag cart probably doesn’t have propane tanks, if we start treating street vendors generally as subjects of suspicion, we’re less likely to see the cooperation that Jackson gave.

Food trucks may make great surveillance platforms, but that’s true of citizen observers like Jackson as much as terrorists.

Then there’s the other real terrorist attempt in NYC since 9/11: Najibullah Zazi’s thwarted plot to attack the subway. Before he gave it up to become a terrorist, Zazi ran his father’s food cart in the financial district.

For years, he was a fixture in Lower Manhattan, as regular as the sunrise. Every morning, Najibullah Zazi would be there on Stone Street with his pastries and his coffee, his vending cart anchored to the sidewalk.

For many on Wall Street — young, old, all in a hurry, the charging bulls of Bowling Green — his was the first hello of the day. Affable and rooted, he lived for 10 years in the same apartment with his family in Flushing, Queens. His father drove a cab for more than 15 years.

He was, in other words, no brooding outcast, no sheltered, suggestible loner raised in a closed community.

He was the smiling man who remembered a customer liked his coffee large, light and sweet. He had a “God Bless America” sign on his cart. He was the doughnut man.

But rather than just blowing up his cart and a bunch of banksters, Zazi dropped the cart, flew to Pakistan, learned how to make explosives, moved to CO, bought a lot of hair care products, and then got picked up calling a known terrorist in Pakistan, whereupon the FBI caught him before he finished making his explosives.

Obviously, a smart terrorist isn’t going to follow Zazi’s plan to the letter. But it just shows that even someone with the intent and the coffee cart isn’t necessarily going to use that cart to kill people, even bankster people.

Look, I think it’s a great idea for the FDNY to have a good idea of what fuels well-outfitted food trucks have on them and what jerry rigged ones have, because they do, occasionally and apparently accidentally, blow up.

But that’s a threat independent of the terrorists lurking behind ESPN’s large screen TV. And if we turn all the food truck vendors (who of course often are immigrants) into potential terrorists, we’re going to alienate citizen observers like Jackson.