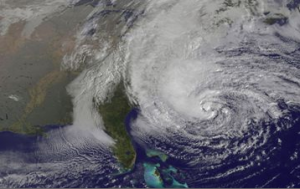 The FTO designation, you’ll recall, is the official designation that signals the US considers an entity a dangerous terrorist organization. The criteria are:

As I see it, the “foreign based” is the only stretch here. While American carbon use is one big contributor to Fat Al Gore (in the same way American foreign policy has been one contributor to Islamic terrorism), we can ultimately claim Fat Al Gore lives in the atmosphere. That’s foreign, right?

As for terrorism? Fat Al Gore’s latest incarnation has shut down the entire Eastern Seaboard. Pictures of Sandy have inspired awe and fear even among experienced Fat Al Gore watchers. Sandy will do billions in damage, and has already killed 51 people. This is a spectacular, horrifying disaster, just as terrorist attacks are.

Perhaps you could argue Fat Al Gore is not a terrorist because it has no political goals. But I think Mother Nature probably does have some policies she’d like us to implement. Hell, we’re going to change our policies in response to Fat Al Gore one way or another, the question is when.

And clearly Fat Al Gore threatens the US–more than any other terrorist right now (and that would be true even without Frankenstorm bearing down on the East Coast).

Now, if Hillary did name Fat Al Gore an FTO, you can be sure all the politicians who’ve been in the back pocket of Fat Al Gore would complain. They’d argue the designations were political.

But as I see it, that complaint was neutralized when State removed MEK from the FTO. Tom Ridge was quite happy when State used designations politically with MEK. How can he complain when designations work the other way, by holding him responsible for supporting Fat Al Gore.