Creeping Unemployment in the New Battlegrounds: PA and MI 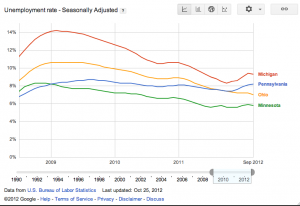 The big news of the campaign, once you get beyond Mitt’s kabuki storm assistance and auto bashing, is that PA and MI are battlegrounds again.

Today, the Detroit News has a poll showing Mitt within 2.7% of Obama (though polling ended on the 29th, when Mitt’s deceitful auto binge began). In fact, while Romney and Ryan were “not campaigning” yesterday, Ann Romney was, here in Grand Rapids.

Some commentators suggest this is just Mitt’s effort to open up new battlegrounds as it becomes clear he won’t win OH and might not win VA (or FL, but that would be game over for him). That is, Mitt has to look viable, and by moving into MI and PA, he can sustain narratives that he still has a shot.

That may be what’s going on.

But it pays to look at what has been going on with the unemployment rate in both MI and PA (I’ve included OH for comparison and MN because it often gets thrown into these discussions).

PA’s unemployment rate is up .8% from its recent low in May. Here, too, Republican governor Tom Corbett has pursued austerity measures. In addition, PA is exposed to the Euro-related decline that has hurt much of the Northeast.

The point, though, is that both these states have the makings of a battleground state–including a white working class population that can swing with economic tides–plus rising unemployment. Obama is still ahead in both. A few more ads about the auto bailout–indeed, Mitt’s deceitful attacks on GM and Chrysler generally–will probably move MI back towards Obama. And the Philadelphia area was spared the worst of Sandy, staving off the possibility that Pennsyltucky would have unimpeded voting while the Democratic Southeast would have floods. So it’s still most likely Obama will win both by comfortable margins.

But one thing makes movement towards Mitt more realistic here than in, say, MN. The economy is getting worse again. And in spite of all Mitt’s unforced errors in recent days, and in spite of the way that Snyder and Corbett’s state level policies–which mirror those Mitt would adopt at the federal level–have almost certainly exacerbated unemployment, voters may still turn to Mitt as an alternative to a stalled recovery.

Mitt’s play in MI and PA is probably a ploy to look viable. But there are a lot of unemployed workers in both states who will help him along.