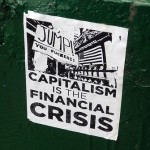 Hey, it’s me, Angry Mom. Yeah, the one who spent the last nine years in political activism. I was utterly immersed in the effort, from baking cookies to persuade voters, to writing op-eds, licking envelopes, dragging my poor kids to conventions, to debating conservative candidates at local forums.

Along the way I learned a thing or two.

First, the overwhelming majority of Americans do not realize how very thin and brittle this democracy is–if we have one at all. I’ve done the math in my own state, and the numbers are probably very similar in yours based on conversations over the years with activists nationwide. A scant 4000 people who show up and do the work actually make democracy run for a state with a ballpark population of ten million.

Not even 1% of this state’s residents. Hell, the über-wealthy 1% are more numerous.

That’s it. Active members (not merely voters) of both major parties combined comprise less than 1% of the population. The other parties have so few people actively involved as to be statistically irrelevant. Go ahead, throw a tantrum about a beloved third party–the fact remains if a third party isn’t de-listed in this or other states, it may be close for lack of adequate numbers of voters.

Second, all kinds of arrogant boneheads think they know enough about politics and its process in America to tell others what what’s wrong with it. Virtually ALL of these opinionators are not a member of that less-than-1%-actively-involved, and probably never have been. I’ve seen them from my perspective as an activist, and I’ve seen them as an editor/journalist–they don’t know anything based on actual experience, but they’ll dump all kinds of opinion and call it fact.

Thirdly, based on what I’ve learned inside the trenches, it’s bloody hard to launch and sustain a movement in this country if you don’t have the right people with the right smarts. With so few Americans actually investing effort in the political process, political leaders are those who simply show up. That’s all it takes. Unfortunately, not everyone who shows up is a charismatic, well-trained genius who can coalesce an organization that can fight back successfully against corporate-funded behemoths. We have political leadership by default, not purely by merit.

These are three of the biggest truths I learned  from this school of hard knocks, tuition paid with sweat, shoe leather, long hours, lost opportunities to watch my kids’ soccer, and tepid spaghetti dinners. Keep these facts in mind and consider the loosely organized Occupy Wall Street movement, which is even smaller than any one political party in their respective state.

Given these takeaways, you’ll pardon me if I get pissed-the-fuck-right-off when somebody with a soft ass who sits behind a desk all day shuffling numbers feels they have the ready answer to why the Occupy Wall Street movement “failed.” 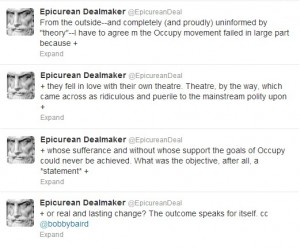 And by a soft ass somebody I mean someone who calls himself an investment banker.

At this point, I have to put on Angry Mom’s pointy-toed shit-kicking shoes and break the fourth wall:

Dude, you are the problem. You and your slack craft-less hands, your cushy desk job, your go-along-to-get-ahead ethics, and your snark-redolent 1% life are the problem. You know jack about the numbers behind OWS, even though your life revolves around massaging all kinds of numbers. You’re proud of your no-nothing status.

Your only beef with OWS appears to be with their execution of tactics–you make no complaint about their raison d’être.

So why the hell are you sitting behind that desk tweeting about how jacked is OWS, instead of sitting outside with them, fixing their crippling lack of numbers and getting them past their ineffectiveness?

Why aren’t you telling the OWS folks what it is they need to know to force a fix of the debacle that is our current financial system and economic model?

What’s it going to take to force unregulated shadow banking into government scrutiny?

How does this country’s financial system extract all the fraudulent crap in the financial food chain–the toxic bits that wind up in the ugly sausage that is unregulated derivatives and swaps?

How do we unwind it in such a way that the system is fixed while the economy is stable?

And what the hell are we to do to prevent it all from happening again–lackadaisical application of regulation, subprime mortgages offered with inadequate credit, separation of mortgage from title for expediency, a system that rewards foreclosures and not refinancing, opaque off balance sheet transactions, corruption of lawmaking stemming curative legislation, and so on?

You and I both know that until all banking is better regulated and the regulatory process itself is more transparent, there’s no accountability. Without accountability, there’s no way anybody outside of the 1% will ever get a crack at participating in anything approaching a truly free market. Until the game is unrigged, the house will always win.

You know the rest of the questions; you know the rest of the answers, too, when it comes to your fucked-up industry. The OWS folks don’t have this kind of knowledge base; they’re not from inside your tight little glossy Gucci world debating over Ciroc or Chopin neat with their caviar served at the nineteenth hole. You could be educating them so they can formulate a better strategy.

But no, it’s a lot easier to pule about your right to an opinion from your not-so-cheap-but-soft seat.

Get a spine, sit up straight, and for once in your pampered entitled life do the right thing.