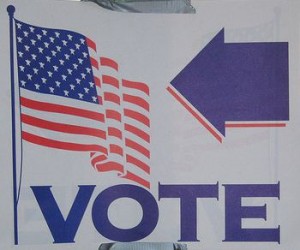 If you haven’t already done so, stop reading this and go vote. Seriously. I’ll wait. This post will be here when you get back.

At the Presidential level, our election has come down to a corporatist hack who ran his earlier primary campaign as a progressive only to govern as a power-mad accumulator of executive powers while doling out “Get Out of Jail Free” cards to torturers and banksters running against a vulture capitalist who didn’t even pretend to disclose how he avoided his patriotic duty to pay taxes and surrounded himself with many of the failed neocon warmongers of the previous administration. Yes, there is the route of the protest vote shouted into the abyss, as well, but there will be the mathematical argument to be made later showing how protest votes enabled the eventual corrupt winner.

The act of voting itself is particularly endangered during this cycle. We have hints that hinky software may be in place, just waiting for the Ohio Secretary of State to flip enough votes to put his guy over the top. We have Florida’s Governor and legislature doing everything they can to suppress the votes of those with whom they disagree. We have reports of “poll watchers” ready to be deployed to minority precincts with the aim to suppress more votes by folks who aren’t white and conservative.

Despite all that, we still have people braving lines hours long to cast their votes. There are still millions who believe there is something in this democracy thing where the citizens get a real voice at the ballot box. As long as that belief persists in such large numbers, there is still hope that it can be turned around.

I don’t pretend to have the answers for how we can get back to a democracy that functions more fully for the benefit of the people. Corporations and the wealthy right now have a free run of a fixed economy that is slanted to funnel money to them and feed the rest of the country on the crumbs. Until our Congress is forced to put into place a tax scheme that levels the playing field instead of tilting it to the powerful, that picture simply won’t change.

But that is one leveraging point. Every single member of the House is up for re-election every two years. My district will finally be ridding itself of the blight of Cliff Stearns, who lost in the primary this year. I’m hoping that JR Gaillot will pull an upset of Ted Yoho as large as Yoho’s upset of Stearns was, but if he doesn’t, I’m pretty sure that I’m going to spend a lot of time over the coming two years documenting and doing everything I can to broadcast the failings of our new Tea Party congressman.

And that’s where you can have some fun, too. Congress has a dismal approval rating and yet individual members of Congress are always overwhelming favorites to win re-election. Perhaps if we all spend more time documenting and broadcasting the individual failures of our own congresscritters we can start to turn the tide and voters will begin to associate the failings of Congress with their own representative. Make your representative own the failure that is Congress.

Pay attention to what is going on. Write letters to the editor, pointing out the failings in real time. Show just how craven these “representatives” are and do your best to create huge problems for them to overcome in their next quest for re-election. You will still be battling the huge money advantage that incumbents have, but by investing time now and throughout the coming term, you just might gain critical leverage that will be hard to overcome with a late barrage of cash and negative advertising.