The Greatest Live Rock and Roll Albums Ever 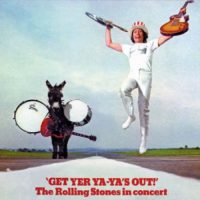 Rolling Stone has a readers poll on the greatest live rock and roll albums of all time. The article is here. The list is as follows:

I am kind of shocked, completely shocked, that I agree with most all of the list. It is really good. First off, and this is a positioning quibble, so not that important, but I think the Stones “Get Yer Ya Yas Out” is the greatest live rock and roll album ever, not the fourth best.

I would not have Frampton Comes Alive on my list. It was unquestionably one of, if not the, best selling and most popular live albums in history; but it was not musically that great of shakes. In its place I would unquestionably put “Full House” by the J. Geils Band (anybody who leaves this off of their list is either nuts or doesn’t know the album).

Secondly, “Alive” by Kiss is actually pretty great in a way. But I would replace it with “Live At The Apollo” by James Brown. Other than that, Rolling Stone’s list is darn good.

Here are five Honorable Mentions that are so good, it is a crime they are not listed:

Well, those are my thoughts. What are yours? This is a open for any purpose music discussion thread, just with emphasis on live rock.