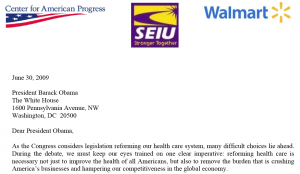 On September 9 and 11, 2009, I noted a dangerous aspect of the Senate health insurance reform plan (which I called MaxTax, after Max Baucus) that would ultimately become ObamaCare: it would give Walmart and all other low-wage employers an incentive to keep its employees in poverty.

It was the only way to get them health insurance for free.

The MaxTax offers this one, giant, out for corporations.

A Medicaid-eligible individual can always choose to leave the employer’s coverage and enroll in Medicaid. In this circumstance, the employer is not required to pay a fee.

In other words, the one way–just about the only way–a large employer can dodge responsibility for paying something for its employees is if its employees happen to qualify for Medicaid. Under MaxTax, Medicaid eligibility will be determined by one thing: whether a person makes less than 133% of the poverty rate. And who has the most control over how much a particular person makes? Their employer!

So if Wal-Mart wanted to avoid paying anything for its employees under MaxTax, it could simply make sure that none of them made more than $14,403 a year (they’d have to do this by ensuring their employees worked fewer than 40 hours a week, since this works out to be slightly less than minimum wage). Or, a single mom with two kids could make $24,352–a whopping $11.71 an hour, working full time. That’s more than the average Wal-Mart employee made last year. So long as Wal-Mart made sure its employees applied for Medicaid (something it already does in states where its employees are eligible), it would pay nothing. Nada, zip. Nothing.

Saturday, HuffPo mapped out what I, too, have been watching. Walmart is making the changes necessary to prepare to do this–charge you and I for health insurance for its employees (actually, more of its employees, as it already uses this approach where it can), all premised on the legal poverty Walmart imposes on its workers–by kicking precisely those employees who will qualify for Medicaid off Walmart insurance.

Walmart, the nation’s largest private employer, plans to begin denying health insurance to newly hired employees who work fewer than 30 hours a week, according to a copy of the company’s policy obtained by The Huffington Post.

Under the policy, slated to take effect in January, Walmart also reserves the right to eliminate health care coverage for certain workers if their average workweek dips below 30 hours — something that happens with regularity and at the direction of company managers.

Labor and health care experts portrayed Walmart’s decision to exclude workers from its medical plans as an attempt to limit costs while taking advantage of the national health care reform known as Obamacare. Among the key features of Obamacare is an expansion of Medicaid, the taxpayer-financed health insurance program for poor people. Many of the Walmart workers who might be dropped from the company’s health care plans earn so little that they would qualify for the expanded Medicaid program, these experts said.

“Walmart is effectively shifting the costs of paying for its employees onto the federal government with this new plan, which is one of the problems with the way the law is structured,” said Ken Jacobs, chairman of the Labor Research Center at the University of California, Berkeley.

What HuffPo doesn’t mention in its piece on this, though, is that this is all presumably by design.

Walmart, after all, was one of the partners behind the push for ObamaCare. In fact, as things started to drag in summer 2009, WalMart partnered with Center for American Progress and SEIU to try to nudge the process along. While the letter signed by the heads of all three organizations preaches of “shared responsibility,” it also talks of removing “the burden that is crushing America’s businesses” and an employer mandate that does not “create barriers to hiring entry level employees” (as workers forced into part time unskilled positions are sometimes facetiously called).

Walmart gave ObamaCare a lot of credibility back in 2009. It was clear then what the payoff was going to be. And they’re cashing in now: by making the poverty wages they pay their employees the trick to get us to pay their employee health insurance, rather than the billionaire Waltons who can afford it.

Update: In other “I told you so” news, Liz Fowler–the former Wellpoint exec who wrote this legislation for Baucus–is headed back to industry to cash in.