Australia’s Institute for Economics and Peace released a study (pdf) today in which they have tabulated terrorist attacks over the past ten years. They have developed a Global Terrorism Index which, on a country by country basis, quantifies attacks by number of fatalities, number of injuries and property damage incurred and allows for trends over time. The top three countries in the index are, in order, Iraq, Pakistan and Afghanistan, where the US has spent the bulk of its efforts in the Great War on Terror since the attacks of September 11, 2001. The fact remains that after over ten years of effort, over a trillion dollars spent and thousands of US troops killed, terrorism remains at greatly elevated levels in those countries compared to the level at the beginning of the study in 2002. There has been a slight plateauing of the number of attacks since its peak in 2007, but there is no real trend toward lower numbers of attacks. The top ten countries, from the report:

the threatened or actual use of illegal force and violence by a non-state actor to attain a political, economic, religious, or social goal through fear, coercion, or intimidation

The study notes that in this context, drones are excluded:

This definition excludes perceived acts of state terror, such as drone attacks resulting in civilian casualties.

As mentioned above, attacks increased greatly from 2002 through 2007 and then plateaued. The trend of attacks over time can be seen here: 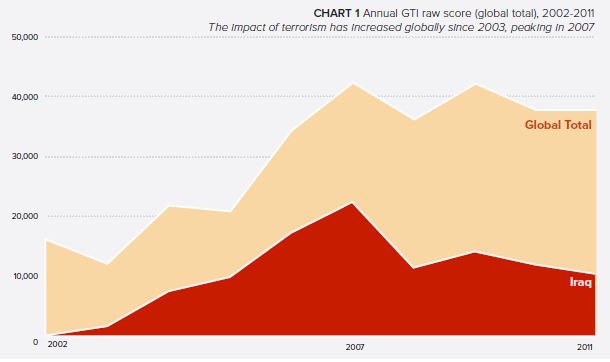 The study looked at the data in an attempt to find potential causes of terrorism (emphasis in original):

Analysis has also been carried out against a range of socioeconomic data to determine what factors may be associated with terrorism. The factors that correlated the strongest with the GTI were group grievances, intergroup cohesion, human rights, and political stability.

Interestingly, even though the US embarked on its Great War on Terror in response to an attack by al Qaeda, the study found only one incident in 2011 attributed to it. However, there are many offshoots of the group which remain active:

According to GTD data, however, the al-Qa’ida organization itself was responsible for only one incident – a kidnapping – out of the 5000 terrorist incidents in 2011, while 11 of the most 20 [sic] active groups globally were al-Qa’ida linked.

So while the primary al Qaeda organization is essentially defunct with regard to terror attacks, its offshoots remain active.  In terms of fatalities, the top three groups for the time period 2002 through 2001 were the Taliban, al Qaeda in Iraq and Islamic State of Iraq. Despite all the effort by the US, its targets remain the most effective actors in global terrorism in terms of deaths.

In a rational world, this report would prompt long, careful review in Washington and a reassessment of how our country goes about trying to stop terrorism. Instead, it is more likely to result in allocation of even more lives and treasure to tactics and strategies that have proven completely useless.