Acknowledgement of Failure in Afghanistan Spreads Throughout US Government 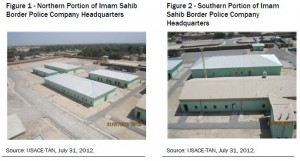 As if the State Department’s travel warning isn’t devastating enough to the Afghan war situation, a report released yesterday by the Special Inspector General for Afghanistan Reconstruction (SIGAR) (pdf) demonstrates that the claim that ANSF force size has achieved the 352,000 goal is a sham. The photos above depict a $7.3 million facility built by the US for Afghan Border Police in Kunduz Province. The findings of the report are devastating:

SIGAR’s inspection was limited to two buildings and a portion of a third of the total 12 buildings at the facility because most buildings were locked and on-site personnel did not have keys. No major construction quality issues were identified at the buildings SIGAR inspected.

Built with a capacity for 175 persons, only about 12 Afghan personnel were on site during SIGAR’s inspection, and they were unaware of plans to move additional staff to the facility. Construction plans for Afghan forces were aligned to the personnel strength of 352,000, and there were no plans to adjust the building program to varying circumstances. Most buildings appeared unused and some equipment—specifically, wood-burning stoves near the site’s dining facility—had been dismantled.

Although SIGAR spends an inordinate amount of effort in the report discussing the dismantling of the wood-burning stoves (without apparently realizing they could well have been just about the only items in the whole facility with some value to the local populace), their recommendations for moving forward incorporate an underlying assumption that ANSF force size will be much smaller in the future and US facility construction plans need to be downsized accordingly. Most significantly, SIGAR states outright that this facility was planned under the 352,000 force size assumption and wasn’t subsequently “adjusted” to what now appears to be “varying circumstances”.

Consider the figures just for this one facility. SIGAR notes it was built under a plan where it would be staffed by 175. Despite claims from the US military that the plan (called a tashkil) was revised downward to a staff size of 59, SIGAR found only 12 personnel on site and most of the buildings locked and unused. SIGAR’s recommendations include a warning that future facility plans should be scaled back to levels in line with actual ANSF force size rather than the sham public figures. Well, yes, I put a few words in their mouths there, but here is their actual wording on that point:

SIGAR recommends that USACE, in coordination with the NATO Training Mission-Afghanistan/Combined Security Transition Command-Afghanistan (NTM-A/CSTC-A), review plans for constructing Afghan police facilities to determine whether site construction contracts can be downsized or facilities redesigned to reduce unnecessary costs or if facilities, including this location, are needed.

This recommendation bounced through several different commands in the military with each adding its own response, but the one from NTM-A/CSTC-A is most interesting, because it appears to me that the NTM-A/DCOM-P entity within their purview will be tasked with maintaining the police component of the 352,000 force size sham claim until December of this calendar year, when responsibility for force size will be handed over to Afghanistan’s Ministry of the Interior. [It appears that NTM-A/DCOM-P is NATO Training Mission-Afghanistan, Deputy Commander-Police.] Here is how they couch their response:

So the explanation for only 12 personnel on site at an almost completely unused facility is that Border Police conduct “dispersed daily operations” and many of them won’t be found at their facilities. I’m guessing these personnel are so dispersed that they mostly can be found at their homes rather than being on duty, just like the rest of the ANSF deserters who were originally trained as part of the 352,000 force size and no longer have any real affiliation with ANSF.