It is finally Super Bowl weekend and it feels….kind of blah. Maybe it is because two brothers from an apparently nice wholesome family are squaring off after two weeks of nice making between themselves and their teams. I dunno, but there seems to be a distinct lack of intense vibe, at least to my senses. Super Bowl weekend is also always bittersweet because it is truly the end of the football season and of regular Trash Talk. Sure we will be around for the start of the Formula One Circus and maybe March Madness, but this is it for the regular Trash posts.

In New Orleans there is a party going on. There is also the nagging specter of Katrina hovering over the festivities. For all the glitz and glamor, the Big Easy is still a tale of two cities. There is the glitzy tourist centric French Quarter, which largely survived Katrina intact, the well to do areas of the affluent, all restored and ready to party, and the center of it all this weekend, the Superdome. They are all looking good.

Lets look at at the Superdome, which is not only rebuilt and beautified, but now bears the signage and imprimatur of the ultimate in prestige and wealth, Mercedes Benz:

The multi-phase $336 million project begun after Katrina wrecked the building in 2005, stripping away part of the roof and dumping water throughout, allowing mold to grow unchecked. Evacuees stewed in the summer heat without air conditioning or working bathrooms in a scene that epitomized the chaos of the disaster.

The Federal Emergency Management Agency provided $156 million of the renovation money, said Superdome manager Doug Thornton. He said renovating the Superdome was half the cost of building a new stadium.

“This is a brand new stadium,” said New Orleans Saints owner Tom Benson, who pushed hard for construction of a new facility before the 2005 storm. “It’s got all the things we wanted. I haven’t seen a finer stadium in the country.”

We bought that. Now that is not necessarily a bad thing, the Superdome was one of the symbols of New Orleans, and an eye that was blackened by Katrina’s surge and aftermath. It was important symbolically to heal and it is an economic driver for the city. Federal money spent means jobs and there is no denying the pride that the folks of New Orleans took in the rebuilding of their house and the rebirth of the Saints, culminating in their own Super Bowl season. It was a transfusion for an ailing city.

As we get ready to celebrate all that is good, glitzy and reborn about New Orleans, let us also take a moment for all that is lost and unrecovered. And there is still that. The population of New Orleans, although growing well, is still only about 80% of its pre-Katrina level and many of those were not the ones who were driven out never to return. Cleansing is a tough word, but it may have some application, and not in a good way.

Having taken a look at the side of the city that is whole again, let us also do so for the infamous areas that are not:

Most tourists this week will see the parts of the city that fared the best during the hurricane — the French Quarter and the Garden District, built on the highest ground near the Mississippi River. But many neighborhoods still bear Katrina’s scars, from the brown stains of high-water marks on buildings to piles of rubble on lots overgrown with weeds. Unemployment and crime rates are still high.

“It’s hard when you walk out the door and don’t see a house across the street,” said Nevles Brown, 46, who lost his home in the Lower Ninth, but now rents a refurbished one nearby.

His uncle, Ronnie Brown, lives down the block in a house that shouldn’t be standing. Still visible on the bright blue siding are spray-painted X’s — symbols drawn by rescuers who checked the houses for survivors in the early days. The front corner of the roof is sheered and splintered.

“I got nowhere else to go,” Brown said, sitting in a chair on the remains of his front porch.

Overall, you have to feel pretty good, both for, and about, New Orleans this weekend. They have come alive again, but there is still work to do and people to heal in the less glitzy areas. And then there is the homophobia that has surfaced in an ugly way over the last week in the hustle and bustle of the Super Bowl scene.

That is the tale of the city, now for the teams. Niners and Ravens. On the hermetically sealed, temperature controlled fake tundra. As the future of this blog may depend on it, I want to be clear:

The San Francisco 49ers will be the Champions of Super Bowl 47!

As my prediction record is basically 0 for the last few weeks, this should bode well for the Ravens and allow the good work here at Emptywheel to continue unabated.

There are several reason behind my Niners pick. First off, San Francisco has been to exactly five Super Bowls, and they have won all of them. Jo6pack and JohnT, both of the Bay area demand a six pack of Super Bowls. Ray Lewis turned his “last ride” into a sleigh ride. John Harbaugh has been too bubbly and fun, Jim Harbaugh has been too quiet and sullen, you KNOW he is plotting. 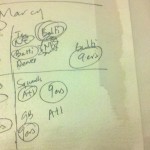 I could go over the usual litany of players and potential impacts on the game, but you know them already. Both teams are pretty healthy and ready to go. Lewis may still have a wounded Raven wing, but he played fine against the Pats and has now had an additional two weeks; he will be ready. I am going to go out on a limb here and say the difference may be…..Randy Moss. The Ravens play great ball hawking pass defense; Ed Reed and the boys will have to focus on Michael Crabtree and Vernon Davis. If they leave Moss one on one downfield, he will burn them. If they pay attention to Moss, there has to be less overage on Crabtree or Davis. Both are killers for Kaeprnick to exploit.

So, what will Roger Goodell be eating while in Nawlins watching the NINERS WIN? Well, not sure, but there is a laundry list of fine establishments that refuse to serve him. Man, that’s cold.

Music this week is by a variety of Big Easy big names. That is it, see you in comments!