The Benghazi Truthers and the OLC Hold-Outs 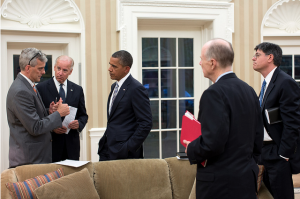 Dianne Feinstein announced yesterday that the Senate Intelligence Committee would not, as originally planned, vote on John Brennan’s nomination today. No Valentine’s Day love for Brennan I guess.

DiFi cited outstanding questions on Benghazi and the 7 OLC memos the White House has withheld.

That’s important background to this Joshua Hersh story, which makes fun of Richard Burr (who had just made a joke about his relative Aaron Burr killing Alexander Hamilton) grilling Jack Lew about who briefed Obama on Benghazi the night of the attack. As Hersh points out, the White House has released a picture showing Denis McDonough briefing the President that day, which ought to answer Burr’s question.

What Hersh doesn’t say is that Burr specifically asked Lew whether Brennan was in this loop. In the closed session on Tuesday, apparently, Brennan said he wasn’t. This comes on top of the White House withholding — at least as of last Thursday — Presidential Daily Briefs and some emails about the response to Benghazi as it unfolded.

Now, Lew’s role in Benghazi briefings really won’t affect his job as Treasury Secretary. But Brennan’s role might, particularly if the Murdoch boosted eBook alleging he was running ops in Libya out of the White House is true (I’m not saying it is).

In any case, the persistence of the Benghazi truthers has introduced an interesting dynamic I didn’t expect. Of the Republicans on the Senate Intelligence Committee, only Susan Collins and possibly Tom Coburn are not full-on Benghazi truthers (and James Inhofe, who gets a vote if he wants one as Armed Services Committee Ranking member, could add another truther vote).

But Collins is part of the other group — along with at least Ron Wyden and Mark Udall — holding up Brennan’s nomination, those demanding the 7 OLC memos on targeted killing the White House has thus far refused to turn over to the Committee purportedly overseeing these killings. That puts the vote somewhere in the vicinity of 9 votes holding out for something from the White House, 6 votes ready to vote Brennan’s nomination forward.

So who will the White House cede to? The Benghazi truthers, or the OLC holdouts? And is what is in the material the White House has thus far withheld enough for these groups to vote against Brennan?

Note, there’s always the possibility these groups will converge. The public record supports the conclusion that Libyan militants in Derna claimed to have been struck or at least surveilled by a drone. Those militants have ties, at least, to the militants who carried out the attack on the Benghazi post, and the public record also supports the claim the militants were avenging that drone surveillance or strike.  If that drone was approved by an unknown memo authorizing continued strikes in Libya, it would be something that both the Benghazi truthers and the OLC holdouts would be interested in.