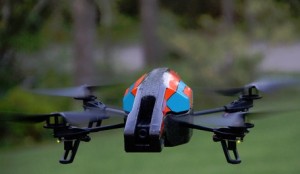 Here’s an assortment of goodies that crossed my tablet over the last 24 hours or so. Which of these tidbits fires you up?

•  The Verge reported Friday that a new bi-partisan privacy bill sponsored by representatives Ted Poe (R-TX) and Zoe Lofgren (D-CA) targets the use of drones in the US.

“As written, it would ban police from operating unmanned aerial vehicles armed with weapons of any kind, and any drone surveillance operation would require a warrant notifying the target within 10 days, except when the notice would “jeopardize” an investigation. It also requires they make efforts to “minimize” the amount of data collected or shared, to avoid violating privacy unnecessarily. …

…Fears over the use of drones have increased lately as both President Obama and his counterterrorism chief John Brennan refused to answer whether lethal strikes could be used against American citizens on US soil. …”

When drones can be remotely operated by iPhone or Android cellphones and cost less than $300, we’re way past time for this bill. It might not hurt citizens to act locally as Charlottesville, Virginia has, enacting a ban on their use in their municipality. Think a drone couldn’t possibly slip by you to monitor you without permission? This one pictured here is only 22 inches long, comes equipped with a 720p high-def camera on board–imagine it hovering and peering in your bedroom window, or your kid’s room, its video output watched from an iPhone miles away.

•  Friday’s meteorite-asteroid-meteorite triple whammy certainly shook up the globe. What? You didn’t hear about the third one? Apparently when the smaller meteorite passed over California about 7:42 pm PST, the media had already used up its allotment of cosmic-related coverage for the week. Or year. Anyhow, objects hit our planet all the time that we don’t notice or publicize widely; it was the rare confluence of a near-miss asteroid and a larger-than-average meteorite within a 24-hour window that only made us think earth’s pummeling by space debris is unusual. Given that meteorites and asteroids are not all that rare, it seems like we’d do more to be prepared for impacts–especially since we’ve had pretty decent guesstimates about the damage space objects could inflict.

•  Speaking of science, science writer Philip Ball looks at the discovery of the microscope and its dramatic impact on science and religion. Technology that allowed us to look at our world at meta-scale has also had an impact on our perspective; the famous “blue marble” photo* from an Apollo mission is credited with increasing public interest in ecological studies, environmental protection, and space exploration. What technology will encourage us to get our tails in gear on climate change?

•  Finally, this photo-dense piece gives me pause. I was two years old when these were taken; what an incredible year that was. I wish I’d been old enough to remember any of these events, and yet, I’m glad some of them were well behind us by the time I was school-aged. Some of these photos remind me how little things have changed. Just Google “church arson” or “race hate crime” and you’ll see what I mean.

By the way, I’m open to suggestions as to naming these collections of newsy bits and pieces. Leave me your thoughts in comments. Thanks!

* When I first drafted this post, I didn’t know today marked the anniversary of the similarly important “pale blue dot” photo. How time flies.