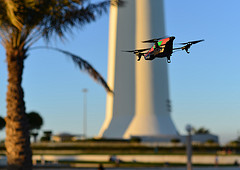 Photo: AR Drone 2.0 being tested near Kuwait Towers (by Cajie via Flickr)

Happy Monday. Insert a picture of that cat here–you know which one. I resemblez it.

•  Good gravy, people. When National Geographic Magazine covers drones, it’s way past time for a national dialog about their use domestically. Crop dusting, my backside; there’s nothing except for the subhead in this article to genuinely suggest the designers, manufacturers, and potential buyers of drones are thinking about non-surveillance, non-policing applications for these unmanned aerial devices.

•  Of course it hasn’t helped our current condition that not one but at least two generations of military were shaped into the “Generation Kill” mold, about which Foreign Affairs learns from retired General Stanley McCrystal.

“People hear most about the targeting cycle, which we called F3EA — “find, fix, finish, exploit, and analyze.” You understand who or what is a target, you locate it, you capture or kill it, you take what intelligence you can from people or equipment or documents, you analyze that, and then you go back and do the cycle again, smarter.”

Color me skeptical, but this doesn’t sound like appropriate training future civilians–those now serving in our military–will use for guiding crop dusting or weather monitoring drones.

•  “Generation Kill” has a shadow identity, as well; the legitimately uniformed forces have dark counterparts in crime, which is likely shaped by the same attitudes as the military and police who chase them. Thwarted in illegal weapons sales, the supply chain arms traffickers use may be put to use in purveying goods of a different kind of kill. The horsemeat contamination scandal in Europe appears to be built upon the infrastructure of criminal arms dealer Viktor Bout. Where once illegal weapons might have been hidden in dog food, now illegal dog food is hidden in, well, our food.

•  Of course, when this all gets too serious and we need to be distracted, somebody offers up a clown since bread and circuses always work to appease the masses. Today’s fool is Gérard Depardieu, savaged for his luxe lifestyle and his exile from his mother country. France’s current “supertax” policy–75 percent assessed against all income above one million euros, intended as a short-term fix to a national budget deficit–ostensibly drove Depardieu into the arms of the ever-execrable Russia. The actor whose work is synonymous with modern French cinema is now reviled as minable, pathetic. What seems incredibly pathetic to me is the strident ignorance of both policy makers and the French; only 3000 countrymen were subject to the tax, and it is too easily escaped. Was the problem really with these 3000 that the budget suffered, or were other structural problems at fault that might not yet be repaired? One can see readily how a similarly simplistic law enacted in the States could have similarly ridiculous and ineffective results. But Depardieu is an easy, large, and slow-moving target, not unlike the French royals who could not outrun the guillotine. Minable, indeed; how readily the populace is distracted by redirection to a clown.