Afghanistan Kills Yet Another Military Career: Allen to Retire 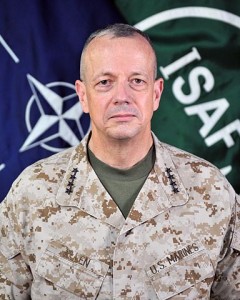 After multiple missteps, General John Allen has “chosen” to “retire” rather than face a Senate confirmation to be head of NATO.

Many times throughout recorded history, would-be empires have attempted to conquer Afghanistan, only to fail. These failures often have been so spectacular that they end up taking the would-be empires down for their efforts, as most recently seen when the Soviet Union’s ill-fated war in Afghanistan was one of several factors leading to its demise.

Ignoring that history, the US invaded Afghanistan shortly after 9/11. The Bush administration subsequently diverted attention and resources from Afghanistan into its war of choice in Iraq. Barack Obama made Afghanistan his “necessary war” as he campaigned for office in 2008, and yet the joint management of the war in Afghanistan by his administration and the military has been no more professional than the fiasco under Bush.

Remarkably, there has been little criticism of the mismanagement of this war, although when General John Allen was snared into the panty-sniffing investigation of David Petraeus’ extra-marital affair, AP noted that Afghanistan has been killing the careers of top commanders:

At the international military headquarters in Kabul, it’s jokingly being called the curse of the commander’s job.

The last four U.S. generals to run the Afghan war were either forced to resign or saw their careers tainted by allegations of wrongdoing.

That second paragraph can now be revised, as the official announcement has now come out that Allen will retire rather than face a confirmation hearing on his previous nomination to head NATO. The official explanation is that Allen is resigning so that he can help his wife deal with a number of health issues, but Ed (“Did You Beat Tiger?!?”) Henry informed us last week that Allen was “pushed” in an article that strangely seemed to link the sacrifice of Allen with an expected eventual confirmation of Chuck Hagel as Defense Secretary.

A voice in the wilderness daring to criticize the failures of military command in Afghanistan and Iraq has bee Tom Ricks. He wrote in the New York Times in November:

OVER the last 11 years, as we fought an unnecessary war in Iraq and an unnecessarily long one in Afghanistan, the civilian American leadership has been thoroughly — and justly — criticized for showing poor judgment and lacking strategies for victory. But even as those conflicts dragged on, our uniformed leaders have escaped almost any scrutiny from the public.

Our generals actually bear much of the blame for the mistakes in the wars. They especially failed to understand the conflicts they were fighting — and then failed to adjust their strategies to the situations they faced so that they might fight more effectively.

Ricks even understands why the military has escaped criticism:

In the past, Congressional oversight hearings might have produced some evidence that challenged the military’s self-satisfied conclusions. But today, politicians are so fearful of being accused of “criticizing our troops” that they fail to scrutinize the performance of those who lead them.

Allen’s errors have been huge. Perhaps the largest was his contention that green on blue killings spiked last summer because Afghan troops were fasting during Ramadan. However, his complete disregard for the evidence of failure in Afghanistan even when the rest of the government finally begins to admit it also reflects on his separation from reality.

Sadly, it appears that even after the carnage to command that has accumulated in part due to failure to face reality, easily debunked explanations continue to come out of military commanders in Afghanistan. Just this morning, we have a report from CNN trumpeting a month without US casualties, but once we drill down to explanations, reality gets lost:

For the past month, the U.S. military has experienced something not seen for five years in Afghanistan: No combat deaths.

Afghans now lead more than 80% of combat operations and control areas covering more than three-quarters of the population, according to U.S. military officials.

“The Taliban are targeting the Afghan Army and police to try and show the populous the Afghan Security Forces cannot adequately protect them,” said Col. David Lapan, spokesman for the chairman of the Joint Chiefs of Staff.

“They are trying to undermine the future of the (Afghan Security Forces),” he said.

Having reached their peak of 352,000 last year, more Afghan security forces will also bring more casualties as well, according to defense officials.

The argument that Afghan fatalities (which don’t matter enough to be counted by CNN, apparently) are increasing mainly because Afghan National Security Force size has become so large is just as false as the previous attempt to blame the spike in green on blue killings on increases in Afghan troop numbers. Completely missing from this explanation is how inadequate the vaunted US training of the ANSF has been and how even the claim of 352,000 as the ANSF force size (see the link above on evidence of failure for an example of staffing at an Afghan Border Police facility) cannot be supported after the disruption in training while attrition continued at its high rate. Why won’t the military admit that putting poorly trained troops in charge of operations is a recipe for getting large numbers of them killed?

Note also that US military sources dwell on the decrease in civilian casualties and while they note that the Taliban now seem to be targeting Afghan forces, they omit the UN’s observation that women and girls now also are being targeted. It should also be pointed out that there were media reports last week that child deaths were increased according to a new UN report, but that particular report still doesn’t seem to have been posted on any UN website that I can find. NATO even publicly disputed the finding and it’s unclear to me whether the absence of the full report is due to this protest or if the report had somehow been leaked to the press before it was due for official release.

Given the obvious spin away from reality in today’s CNN story, don’t look for Afghanistan under Dunford’s command to be any more successful than it has been for the last decade plus.

tweets from our circle
bmaz@bmazRT @doug_ramsdell: Amen. too much glass, too much concrete for bullets to ricochet off. only way the opinion would be worse is if they nati…2 hours ago23 May 2022
bmaz@bmazHere is Adam Schefter, star "reporter" for @espn once again unabashedly shilling for a gambling business. What a li… twitter.com/i/web/status/1…2 hours ago23 May 2022
bmaz@bmazCowboy Chuck rides in. This is hilarious: twitter.com/awfulannouncin…2 hours ago23 May 2022
emptywheel@emptywheelThis sounds like a job for Mike Flynn. twitter.com/pbump/status/1…4 hours ago22 May 2022
RayneToday@raynetodayLOL Perhaps the mythical "single server" the right-wing wanted turned over after the DNC was hacked already resides… twitter.com/i/web/status/1…9 hours ago22 May 2022
Ed Walker 🍞🌹💉💉@MasaccioEWRT @espinsegall: Good morning. So Ginny Thomas was paid for many years to lobby against the ACA while Clarence Thomas on several occasions…13 hours ago22 May 2022
Ed Walker 🍞🌹💉💉@MasaccioEWRT @Artemesia44: We have a SC that is almost entirely right wing Catholic and is trying to impose its Opus Dei, handmaiden cult views on th…13 hours ago22 May 2022
Jim White@JimWhiteGNVWe feast tonight! The butts cooked faster than expected., but will hold safely wrapped in foil and in a cooler unti… twitter.com/i/web/status/1…1 day ago21 May 2022
RayneToday@raynetodayRT @darth: i know this is completely unrelated but imagine spending nine fuckin hours with that guy2 days ago21 May 2022
Jim White@JimWhiteGNVWho’s ready for baseball at the end of the rainbow? pic.twitter.com/QWJZZK5LpC2 days ago20 May 2022
Jim White@JimWhiteGNVMore than fifty folks from the church are signed up to eat pulled pork in my back yard tomorrow evening. Fortunatel… twitter.com/i/web/status/1…2 days ago20 May 2022
RayneToday@raynetodayRT @wyatt_privilege: Not a mind blowing observation but the game now is to send crazy shit upstairs to scotus and invite them to remold, sc…4 days ago19 May 2022
RayneToday@raynetoday~ding-ding-ding~ Accurate. twitter.com/robinmarty/sta…4 days ago18 May 2022
Jane Harman Now Targeting Individual CyberTargets with Drone Court Department of Pre-Crime, Part 4: The NDAA Congress Is Not About to Legislate...
Scroll to top