Detail from CIA map of Afghanistan. Click on map for a larger view.

The Afghan Local Police program was a centerpiece of David Petraeus’ counterinsurgency (COIN) program in Afghanistan when he took over command after Stanley McChyrstal was fired. The program came under extreme scrutiny this week when Afghan President Hamid Karzai called for the expulsion of US Special Operations forces from the province of Maidan Wardak after repeated reports of atrocities carried out by forces claiming to be allied with ALP forces trained by SOF. Today, there is further bad news for the ALP program, as seventeen people have been killed at an ALP post in what appears to be an insider attack. Since the attack occurred early this morning, it should be kept in mind that information is still coming in regarding the details of what took place. Today’s attack was in Ghazni province, which is adjacent to Wardak, as seen in the map here.

Back in September, training of ALP was the first program suspended due to insider attacks. The (delayed by the elections from October) December 2012 “Report on Progress Toward Security and Stability in Afghanistan” (pdf) informed us that the re-screening of ALP was already moving quickly by then:

To mitigate the risk of insider threats, SOJTF-A has taken active measures to re-validate all 16,474 ALP personnel. This revalidation process is currently 52 percent complete, with less than one percent removed due to nefarious activities or counter-intelligence concerns. This process, which is currently ongoing, is very similar in design to our initial screening/validation methodology. It begins at the local level by conducting shuras and intimately involving local elders, who must vouch for each ALP member, ensuring he remains in good standing. Each member’s application paperwork is re-reviewed by various personnel from the Coalition, MoI, NDS, and the DCOPs. If any ALP member “flags” as suspicious, additional counter-intelligence (both Afghan and Coalition) measures are taken. If it is determined that an ALP member is unfit, he is removed from the program. These processes are non-negotiable. In addition, NDS plans to embed three agents per 100 ALP to identify possible infiltration by the enemy. The prevention/elimination of Insider Threats will remain COMISAF’s top force protection priorities.

So Special Operations Joint Task Force-Afghanistan claimed in December that they had already revalidated just over half the ALP force and that less than one percent of the force had been removed due to potential nefarious connections. And yet, almost two months later, we now have a major attack on ALP that has the hallmarks of an insider attack. From the New York Times:

A group of 17 Afghan policemen were drugged by their comrades while on duty and then shot to death in their sleep in what appears to be the single worst incident in a string of similar attacks, according to Afghan officials.

The attack took place at a remote Afghan Local Police post in Ghazni Province, south of the capital, early Wednesday morning, according to General Zrawar Zahid, the Ghazni police chief.

Other Afghan officials said authorities had already arrested two policemen who they said were Taliban infiltrators who had carried out the attack.

The AP report carried by the Washington Post suggests that not all the dead were ALP:

The dead included 10 members of the government-backed Afghan local police, and seven of their civilian friends, said Provincial Gov. Musa Khan Akbarzada. He says there was a conspiracy of some sort but declined to confirm if poison was involved.

The previously mentioned December report from DoD has a remarkable level of detail on the status of the ALP, with a snapshot as of September 26, 2012: 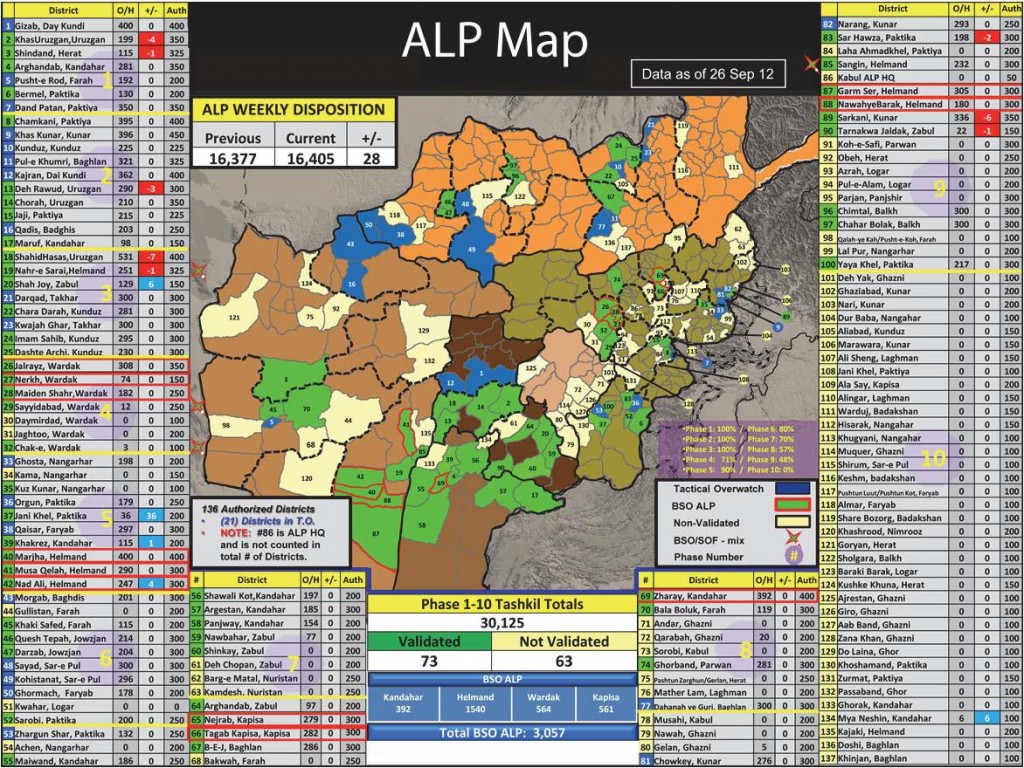 If we read the detail in the map, we see that Wardak province has seven districts for ALP, for which a total of 1400 ALP personnel have been authorized but only 579 were on hand at the time of the snapshot. Three of those seven ALP districts were designated as districts where the ALP were the validated BattleSpace Owners (BSO), two were validated but presumably still under CSOJTF-A control and two were not yet validated. This wide range of validation and battlespace ownership status for the districts within Wardak make sorting out the claims of crimes carried out by ALP personnel hard to assign to any one overall responsible entity.

It should also be noted that the December report appeared to anticipate the problems seen in Wardak:

The proliferation of independent non-GIRoA [non-Government of the Islamic Republic of Afghanistan] sanctioned militias, which operate outside the VSO/ALP [Village Stability Operation/ Afghan Local Police] framework, threaten to undermine the legitimacy and progress of the program. Although limited in number, these unauthorized organizations threaten to damage the ALP “brand,” especially when they inappropriately use the ALP name to further their own interests. Although there are a few incidences to contrary, the ALP has favorable name recognition in the majority of Afghan provinces in which polling has been conducted.

But we also see an indication that Special Operations forces should bear the blame for unauthorized activities and for insider attacks because the report maintains that there is a high level of embeddedness:

Underscoring the effectiveness of the program, the Taliban Senior Leadership (TBSL) have identified infiltration of the ALP as a primary objective to weaken the program. As of August 2012, a small minority of insider attacks (3 out of 78) have involved members of the ALP. SOF remain deeply embedded with ALP, more so than other ISAF units working with AUP or ANA. Although this exposes them to much more direct contact with possible infiltrators, also it also allows for a better understanding of the human terrain and an opportunity to identify possible threat indicators.

At least according to the December report, insider attacks in ALP should have been very difficult to achieve. It would appear that today’s attack must have taken place in a group of ALP there only very recently formed. The New York Times article says the attack was in the Andar District of Ghazni province, but the September 26, 2012 snapshot shows no ALP personnel on hand on that date despite 200 being authorized and the district not being validated. It would appear that the vaunted new screening procedures still need some improvement. It is also mysterious that no US troops are reported to have been present during the attack, so the level at which Special Operations forces are embedded with ALP may also be overstated by DoD.

Update: While this post was being written, the Times updated their article to confirm both what I deduced above about the unit which was attacked being recently trained and about incomplete screening of new recruits. From the new material in the article:

This unit, which was completely wiped out by the attack, had been trained by the Americans at a base in the Andar district center a month ago, according to local officials. Only a week earlier, there was another similar attempt to drug policemen in that district, but the drug had not been strong enough and the victims were able to escape an attack, according to Khalil Hotaki, head of a peace group in Ghazni.

“We have repeatedly warned the A.L.P. recruiters and trainers to conduct proper and accurate vetting processes for people who want to join the A.L.P. ranks,” said Fiazanullah Fiazan, a former provincial governor in Ghazni. “We have told them not to enroll unknown people or people who are not vouched by tribal elders, but they don’t listen. They are trying to meet the recruiting deadline and get credit for it.”