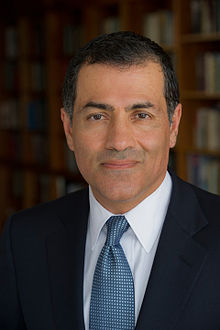 Vali Nasr now serves as Dean of the School of Advanced International Studies at Johns Hopkins.

Foreign Policy has published an excerpt from Vali Nasr’s book The Dispensable Nation: American Foreign Policy in Retreat, in which Nasr relates his experiences as a key deputy to Richard Holbrooke, who served as Barack Obama’s special envoy to Afghanistan and Pakistan. The title for the piece tells virtually the entire story: “The Inside Story of How the White House Let Diplomacy Fail in Afghanistan”. The piece should be read in full (as should the book, I presume), but I want to highlight a couple of passages that fit well with points I have tried to make over the years regarding US policy in Afghanistan and Pakistan.

First, we see an Obama tactic that has not been limited to his foreign policy actions, but is characteristic of him on the whole, where he makes a public move such as appointing Holbrooke, where the move has the appearance of a very positive step, but Obama then undercuts the move entirely by providing no further support (such as when he nominated Dawn Johnsen to head OLC and then abandoned her entirely, even when he could have forced a confirmation vote that would have been affirmative under bmaz’s whip count). Here is how Nasr described Holbrooke’s fate once he established his office:

Still, Holbrooke knew that Afghanistan was not going to be easy. There were too many players and too many unknowns, and Obama had not given him enough authority (and would give him almost no support) to get the job done. After he took office, the president never met with Holbrooke outside large meetings and never gave him time and heard him out. The president’s White House advisors were dead set against Holbrooke. Some, like Lt. Gen. Douglas Lute, were holdovers from George W. Bush’s administration and thought they knew Afghanistan better and did not want to relinquish control to Holbrooke. Others (those closest to the president) wanted to settle scores for Holbrooke’s tenacious campaign support of Clinton (who was herself eyed with suspicion by the Obama insiders); still others begrudged Holbrooke’s storied past and wanted to end his run of success then and there. At times it appeared the White House was more interested in bringing Holbrooke down than getting the policy right.

What drives Obama’s craven manipulation of people in this way? Nasr nails that particularly well:

Not only did that not happen, but the president had a truly disturbing habit of funneling major foreign-policy decisions through a small cabal of relatively inexperienced White House advisors whose turf was strictly politics. Their primary concern was how any action in Afghanistan or the Middle East would play on the nightly news, or which talking point it would give the Republicans. The Obama administration’s reputation for competence on foreign policy has less to do with its accomplishments in Afghanistan or the Middle East than with how U.S. actions in that region have been reshaped to accommodate partisan political concerns.

And this reliance on managing to the day’s news cycle ended just as badly as one would expect. Obama should pay heed to Nasr’s dire warning in his epitaph of the Afghan “adventure”, but we can rest assured that the band of political trolls surrounding him will put their fingers in their ears and shout “I can’t hear you” as Nasr warns of failure for the “exit plan” (emphasis added):

This is an illusion. Ending the wars in Iraq and Afghanistan, not to mention the broader, ill-defined “war on terror,” is a very good idea, provided it is done properly and without damage to U.S. interests or the region’s stability. But we should not kid ourselves that the rhetoric of departure is anything more than rhetoric; the United States is taking home its troops and winding down diplomatic and economic engagement — but leaving behind its Predators and Special Forces. We should not expect that the region will look more kindly on drone attacks and secret raids than it did on invasion and occupation.

Given such a craven M.O., it should not be surprising, then, that despite having Holbrooke present to inform him that the time for diplomacy was at the peak of US troop presence in Afghanistan, Obama waited until he had announced his plan to end the surge and draw down troops to attempt diplomacy, completely undercutting Holbrooke’s approach:

The Obama administration’s approach to reconciliation, however, is not exactly what Holbrooke had in mind for a diplomatic end to the war. Holbrooke thought that the United States would enjoy its strongest leverage if it negotiated with the Taliban when the country had the maximum number of troops on the ground in Afghanistan. He had not favored the Afghanistan surge, but once the troops were there, he thought the president should use the show of force to get to a diplomatic solution.

But that did not happen. The president failed to launch diplomacy and then announced the troop withdrawal in a June 2011 speech, in effect snatching away the leverage that would be needed if diplomacy were to have a chance of success. “If you are leaving, why would the Taliban make a deal with you? How would you make the deal stick? The Taliban will talk to you, but just to get you out faster.” That comment we heard from an Arab diplomat was repeated across the region.

Yet it was exactly after announcing the U.S. departure that the administration warmed up to the idea of reconciliation. Talks with the Taliban were not about arranging their surrender, but about hastening America’s departure. Concerns about human rights, women’s rights, and education were shelved. These were not seen as matters of vital U.S. interest, just noble causes that were too costly and difficult to support — and definitely not worth fighting an insurgency over.

And Nasr addresses the folly of one of my favorite targets within Obama’s Afghanistan policy–the training of a large Afghan National Security Force to take over as we withdraw, describing the reaction of Pakistan’s Army Chief Ashfaq Kayani:

In one small meeting around a narrow table, Kayani listened carefully and took notes as we went through our list of issues. I cannot forget Kayani’s reaction when we enthusiastically explained our plan to build up Afghan forces to 400,000 by 2014. His answer was swift and unequivocal: Don’t do it. “You will fail,” he said. “Then you will leave and that half-trained army will break into militias that will be a problem for Pakistan.” We tried to stand our ground, but he would have none of it. He continued, “I don’t believe that the Congress is going to pay $9 billion a year for this 400,000-man force.” He was sure it would eventually collapse and the army’s broken pieces would resort to crime and terrorism to earn their keep.

Kayani’s counsel was that if you want to leave, just leave — we didn’t believe you were going to stay anyway — but don’t do any more damage on your way out. This seemed to be a ubiquitous sentiment across the region. No one bought our argument for sending more troops into Afghanistan, and no one was buying our arguments for leaving. It seemed everyone was getting used to a direction-less America.

And of course, Kayani was correct. Just in the past few weeks, we’ve seen evidence of problems within Afghanistan itself due to bits of the Afghan Local Police reverting to their militia roots and spreading terror.