Did Pakistan Carry Out Its Own Drone Strikes? 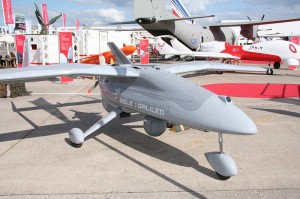 Falco drone, which about half the size of a Predator. GAO reports that Pakistan has the Falco. (Image via Wikipedia)

While his nomination is pending as Director of CIA, His High Holiness of Moral Rectitude John Brennan has seen fit to pause his wanton destruction via drones in both Pakistan and Yemen. Mysteriously, though, there appears to be some confusion over the last two strikes in Pakistan. The New York Times is now reporting that the US disavows strikes that were reported February 6 and February 8 in Pakistan:

When news of the two latest drone strikes emerged from Pakistan’s tribal belt in early February, it seemed to be business as usual by the C.I.A.

Yet there was one problem, according to three American officials with knowledge of the program: The United States did not carry out those attacks.

“They were not ours,” said one of the officials, speaking on the condition of anonymity because of the drone program’s secrecy. “We haven’t had any kinetic activity since January.”

But, as noted by the Times, contemporaneous reporting of both of these strikes followed the usual descriptions that assume US drones were responsible. Here is how Long War Journal described the February 6 attack:

The US launched an airstrike in Pakistan’s Taliban-controlled tribal agency of North Waziristan today, killing five “militants” in an area known to host al Qaeda and other foreign terror groups. The drone strike is the first recorded in Pakistan in nearly four weeks.

The CIA-operated, remotely piloted Predators or the more deadly Reapers fired upwards of six missiles at a compound in the Spin Wam area of North Waziristan. The airstrike leveled the compound and killed five people and wounded several more, according to reports from the region.

Significantly, Long War Journal did note at that time that the pause in strikes was already underway:

Today’s strike broke a 26-day pause in the attacks in Pakistan; the last strike was on Jan. 10. The US has launched eight drone strikes in Pakistan so far this year.

Similarly, the February 8 strike was assumed to be carried out by the US. Here is an account from the Express Tribune from a link I retweeted that day:

Two missiles struck a house in the village of Babar Ghar, a tribal district bordering Afghanistan which is a stronghold of Taliban and al Qaeda-linked militants.

So, if the US denial is to be believed (although the Times article quotes Chris Woods of The Bureau of Investigative Journalism warning us to take the disavowal “with a pinch of salt”), who did carry out the strikes? Returning to the Times article:

Two senior United States officials said there had been no American involvement in the attacks. A third official said the C.I.A. had not paid the reports much attention because no American forces had been involved. But that official said American intelligence pointed to the Pakistan Air Force as having conducted the first strike, probably as part of a military operation against Pakistani Taliban militants in the neighboring Orakzai tribal agency.

Getting accurate news out of Pakistan’s tribal area is notoriously difficult, but since there have been so many drone strikes there, one would think the locals can distinguish between drone strikes and other sorts of attacks such as missiles fired from jets or mortars launched from nearby cover. Going especially to the February 6 strike, where the anonymous US official tells the Times that they believe Pakistan’s Air Force is responsible, the question then becomes whether the strike was missiles fired from a jet or from a drone.

Does Pakistan have drones? Remarkably, the GAO has reported (pdf) that they indeed do:

In addition, an Italian manufacturer has produced and exported the Falco UAV system to Pakistan.

The website AirForce-Technology.com reports that Pakistan has 50 Falco drones and they appear to be roughly half the size of the Predator drones used so commonly in Pakistan by the US. It also appears that they can be armed although as initially delivered to Pakistan they were not:

Though the Falco UAV is large enough to accommodate both a missile and targeting system, it will currently be used for only reconnaissance and surveillance applications. Falco will be equipped with laser-guided missiles in the future to carry out offensive operations. The Falco UAV has one hard point on each wing and will carry a load capacity of up to 25kg.

Recall also that Pakistan evicted the US from the Shamsi Air Base in December, 2011 in response to the border incident in which the US killed 24 Pakistani troops the previous month. That base had been the primary location from which the US launched drones into Pakistan’s tribal area until then, so Pakistan inherited a base ready for offensive drone use.

It will be very interesting to see whether new reports of drone strikes in Pakistan surface with the US claiming not to have been involved. Pakistan will find it difficult to maintain its current cynical political position on US strikes where it is believed by most that Pakistan privately permits the US to carry out strikes (and occasionally may provide target locations) but publicly protests the strikes once they are carried out. If they are shown conclusively to have armed their Falco drones and to have used them to carry out their own strikes, the politics will have to shift dramatically.

Update: Dawn is now reporting that Pakistan’s military denies any role in these two strikes:

Commenting on the report published in the New York Times on Tuesday, a spokesman for the Inter Services Public Relations (ISPR) said “such an accusation is a distortion of the facts and seems to be aimed at diluting Pakistan’s stance on drone strikes.”