Identity Problem: The Delamination of the American Left 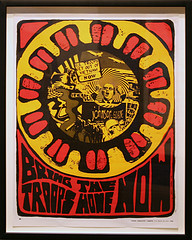 This is an op-ed; opinion herein is mine. ~Rayne

Once upon a time, before the rise of machines — um, before corporations took over and subsumed the Democratic Party, there were people who espoused an ideology of caring for their fellow man. Granted, some of the richest among them ended up elected to office, but they moved Americans to do the right things.

This was a rising-tide-lifting-all-boats kind of Democratic Party, increasingly pro-civil rights and antiwar through the 1960s. The ideology was shaped in no small part by a stronger, more organized political left, manifest in student activism of the period a la Students for a Democratic Society (SDS). SDS in particular espoused direct action and participatory democracy, a hands-on approach to society.

Now entire generations — perhaps as much as three generations — no longer connect the liberal activism of the 1960s with the Democratic Party. Too much time has passed along with negative memes and actions actively impelled by the right linking the Vietnam War to Democratic figureheads like presidents John F. Kennedy and Lyndon Johnson, while undermining the work of other Democratic liberal champions like senators Ted Kennedy and Barbara Jordan. Ask any 20-something if they know who either Ted or Barbara were; you’ll get a blank stare most of the time.

They will, however, remember the Big Dog, Bill Clinton, who was truly Republican-Lite. He catered to business while talking a great game, ultimately undermining American democracy. As an example, his efforts to deregulate media eventually lead to a corporatist mono-culture in broadcast media. He also failed to take any real action to support unions and build the Democratic Party grassroots. He’s thought of kindly because his approach to the deficit, a more restrained approach to militarism, in tandem with the rise of the internet, led to a golden dot-com age pre-dot-com bomb when the standard of living for most Americans was still rising. He and his heir-apparent, current President Barack Obama, are now the face of the Democratic Party for a majority of Americans.

Though its original standard bearers have aged and the world has changed, the fundamental liberal ideology that coalesced in the 1960s still exists; it was a key driver behind the rise of presidential candidate Howard Dean in the 2004 election season. The left wanted direct action and participatory democracy combined with pragmatic achievement of results; barriers to their efforts had decreased because the internet was a cheap and fast facilitator. Obama’s 2008 win is owed in no small part to the dispersion of strategy and tactics embracing direct action and participatory democracy.

Since that win, however, the Obama campaign has done little for either direct action or participatory democracy. After the 2008 win, the OFA folks as well as the Obama White House completely ignored the internet-mediated grassroots it had used for more than a year. They missed an enormous opportunity to reduce the friction generated during the healthcare debate. In the big picture, this may not be a bad thing since Obamacare is simply Romneycare at scale. But in terms of the Democratic Party and the American left, this was a horror — there was no countervailing, unified message pushing back at the rising Tea Party’s toxins.

The Tea Party’s rise is the very antithesis of the 1960s leftist ideology — it was a corporate-funded, corporate-facilitated co-option of direct action and participatory democracy, harnessing ignorance as well as conservative themes in order to realize a corporatist agenda, initially focusing on the 2009 healthcare debate. The internet sped the effort along, while ensuring consistency of its anti-left, anti-Obama, anti-tax, anti-healthcare reform messaging.

Which brings us to the present: the left’s ideology has delaminated from the corporate co-opted Democratic Party to manifest itself in a loosely-organized Occupy movement. Again we see evidence of direct action and participatory democracy in Occupy’s principles and efforts. Occupy has not gained critical mass, though, because it has not organized effectively (in part out of fear of the same kinds of COINTEL that undermined its 1960s predecessors), nor has it a figurehead to act as a lightning rod to encourage identification with the movement. Until organization improves and recognized spokespersons/figureheads emerge, their works will be more nebulous in their impact and not receive the credit due from a plurality of the American public, nor will it have the long-lasting effect on the citizenry’s consciousness.

The youngest of multiple generations do not remember a strong political left, only what passes for left in a corporatist culture. Nor do the overwhelming majority of Americans really understand how their democracy works, often mistaking consumerism for democratic process. These same people now comprise the ranks of journalists and the technology industry, their current industries shaped by decades of rampant corporatism and the paradigmatic cultural shift of analog-to-digital.

They are have been herded into knowledge silos by these forces. Most are clueless about the intersection of political ideology and technology. Their lack of deep political awareness, including their own role in the shaping of politics, contributes substantially to the foundering of the American left and its missing identity.