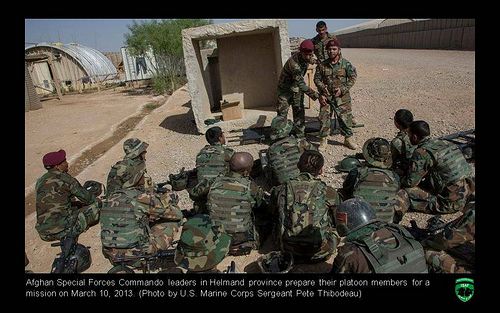 Because I follow the issue of training Afghan forces very closely, I clicked on an article today from TOLONews on graduation of a new group of Afghan Special Forces soldiers. One tidbit in the article caught my eye (emphasis added):

About 200 soldiers on Thursday graduated to the special operations forces of the Afghan National Army, ready to be deployed to the frontlines of the war against insurgents, army official said.

Deputy Chief of Army Staff Gen Azal Aman said at a graduation ceremony for the new commandos that the soldiers had been professionally trained and people should trust them as they are now responsible for the security of major parts of the country.

The ANA soldiers received 12 weeks of intense training to graduate to do special operations.

Hmmm. To be in Afghan Special Forces, it only takes 12 weeks of training? Here is what it takes to be labelled Special Forces for the US:

Like all soldiers, SF candidates begin their career with nine weeks of Boot Camp. Upon completion of Basic Combat Training you will attend Advanced Individual Training. For Special Forces, you will go to Infantry School to learn to use small arms, anti-armor, and weapons like howitzers and heavy mortars. Basic Combat Training lasts 9 weeks, AIT lasts four weeks, and Airborne last 3 weeks. All take place at Fort Benning, Georgia.

After graduating AIT your training will continue with the following schools:

Depending upon your MOS within Special Forces Training, the process of completing these schools can take 14-18 months.

Okay then. Afghan Special Forces are so special that they can get the name after only 12 weeks of training but US soldiers need up to 18 months of training to be Special Forces. And yet, as we saw above, “people should trust them as they are now responsible for the security of major parts of the country”. That should work out just swell.