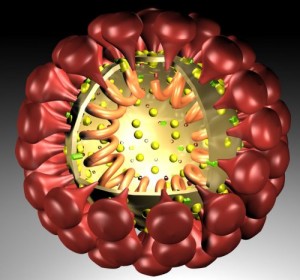 Coronaviruses get their name from the crown-like spikes on their surface. (via WikiMedia Commons)

With the winter flu season now over in the Northern Hemisphere, we can safely say that the feared global pandemic from the newly emerged H7N9 flu virus did not occur. As the weather in China warms up, cases are dwindling in the manner usually seen for any flu virus:

After months of mounting concern, Chinese health officials are breathing a sigh of relief: no new human cases of H7N9 have been reported in the country in more than a week. The milestone marks the first time since March, when the H7N9 outbreak first began, that human cases haven’t continued to increase.

In the week beginning May 13, one previously infected patient succumbed to the virus, according to a statement issued on Monday by China’s National Health and Family Planning Commission. That death brings the H7N9 fatality toll to 36, with 130 confirmed cases in total.

Vigilance will be needed next fall to see if the virus is now lurking, ready to re-emerge once weather conditions are more favorable.

Unfortunately, the situation with another emerging virus is not improving. The newly named (pdf) Middle East Respiratory Syndrome Coronavirus (MERS-CoV) still bears watching since the death toll from this virus has now reached 30:

Three more people have died in Saudi Arabia from the new SARS-like coronavirus, bringing the worldwide death toll to 30, the World Health Organization (WHO) said on Friday.

Saudi health officials also told the WHO of a new case in the eastern province of al-Ahsa, increasing the number of cases worldwide to 50, WHO spokesman Glenn Thomas told reporters at a news conference in Geneva.

As shown in the schematic above, coronaviruses get their name from the crown-like spikes on their surface. The common cold is caused by various members of the coronavirus family.

Another coronavirus that got headlines in the past was the virus causing Severe Acute Respiratory Syndrome, or SARS. That virus was first identified in 2003. This otherwise informative description of the virus and its outbreak that resulted in over 8000 cases and 750 deaths states that SARS is “here to stay”, but the CDC, in this backgrounder on coronaviruses, notes that there have been no reported cases of SARS since 2004.

From the link above where MERS-CoV was given its new name, we get more information on the virus (references removed):

The novel coronavirus seems most closely related to as yet non-classified viruses from insectivorous European and African bats in the Vespertilionidae and Nycteridae family, respectively. Of note, for the latter viruses only partial genome sequences are available. The scarce epidemiological data available suggest that the infection is primarily zoonotic in nature with limited human-to-human transmission. From what we already know of coronavirus biology and from the accumulating evidence for this particular virus, bats appear to be the natural host, and it would be tempting to assume that these animals are also the immediate source. However, this is difficult to reconcile with the fact that most patients were unlikely to have been exposed directly to bats, or with the close genetic relationship between the human isolates, indicative of a recent bottleneck. A more likely scenario is that a single variant from a spectrum of related betacoronaviruses in bats successfully crossed over to and rapidly established itself in (an) intermediate animal host species (at least in the Middle East), with subsequent incidental spill-over into the human population. Such spill over events would be facilitated through frequent intermediate host-human interactions and perhaps through viral adaptations acquired during the initial species jump. Although at present, there is no evidence for sustained community transmission, the obvious concern is that the virus may take the next step and adapt to efficient human-to-human transmission.

Translating from science-speak, what this paragraph is telling us is that scientists have looked at the DNA of the new virus and compared its genetic sequence to that of other closely related viruses. This tells them that the new virus is most closely related to viruses seen in bats. However, the histories of the patients known to have been infected with the new virus suggests that they were not in contact with bats, so it is assumed that this virus jumped very recently from bats to another, still unkown, host that transmitted the disease. (It should be noted here that the animal host for SARS appears not to have been identified, so it is a strong possibility we will never know the source of MERS-CoV, either.) The good news embedded here is that although there is some evidence of the virus spreading from person to person, that spread so far has not been efficient enough to lead to multiple generations of such spread.

It probably should go without saying, but one detail from the paragraph quoted above should put to rest the suggestion out of Iran back when only two MERS-CoV patients had been seen, that the virus was engineered in Western laboratories specifically to kill Arabs. Since only partial DNA sequences exist for the most closely related viruses, this suggests that prior to the outbreak, no laboratory strains existed from which the new virus could have been adapted.

Returning to the biology of this new virus, it would appear that the animal hosts from which people are getting infected are all in the Middle East. From the World Health Organization:

Because there is no evidence the virus is spreading to animal hosts in other areas and because the number of cases is not growing at an alarming rate with the high rate of person to person transmission that was seen with SARS, officials at the WHO do not see the need for special screening or travel restrictions at the present time. Health officials across the globe will continue to monitor the situation, however, in case the virus develops more deadly characteristics.