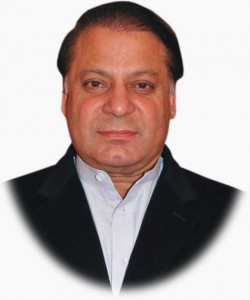 Although the formal casting of ballots by the National Assembly was delayed for an hour by the presence of three times as many observers as the capacity of the parliament house, Nawaz Sharif breezed to an easy victory today and was elected Prime Minister for the third time in his career. Once he is sworn in later this evening by President Asif Ali Zardari, Pakistan will have completed its first-ever transition from one government serving out its entire elected term to another elected government. Sharif wasted no time in making headlines, as he called once again for an end to US drone strikes in Pakistan in his acceptance speech.

Dawn brings us the final tally on the voting in the National Assembly:

Sharif won the office by bagging 244 votes with his rivals Fahim and Hashmi securing 42 and 31 votes respectively.

The Express Tribune describes the overcrowding and its resultant delay:

The session was delayed by an hour due to overcrowding in the parliament house as more than 2000 guests turned up to see the historic transition.

Guests, most of whom had legitimate passes to enter the parliament house, were shifted to the media gallery which frustrated reporters present at the venue. The house is meant to seat nearly 700 observers, thus the surplus of 1300 individuals added last minute chaos.

Speaker Ayaz Sadiq personally went to the media gallery to speak to disgruntled reporters and guests and urged for cooperation.

The New York Times brings us an account of Sharif’s speech:

Pakistan’s new prime minister, Nawaz Sharif, called for an end to American drone strikes in Pakistan’s tribal belt on Wednesday, shortly after he won a parliamentary vote to lead the country for an unparalleled third time.

“The chapter of daily drone attacks should stop,” Mr. Sharif told the packed lower house of Parliament, where he won a comfortable majority of votes. “We respect sovereignty of other countries but others should also respect our sovereignty.”

As the new government continues to form, it will be very interesting to see if Sharif carries through on his pledge to open negotiations with the Taliban, especially with the Taliban saying that they have withdrawn their willingness to negotiate peace after a drone strike killed their number two in command (who may well have been leading the efforts on peace negotiation).

Pakistan’s successful transfer of power from one government to another is to be commended, Perhaps the stage is now set for addressing a number of the issues the country faces beyond drones, such as the huge number of internally displaced people, stopping disappearances in Balochistan and generating enough electricity to end the load-shedding that only provides electricity to many customers for just a brief period each day.