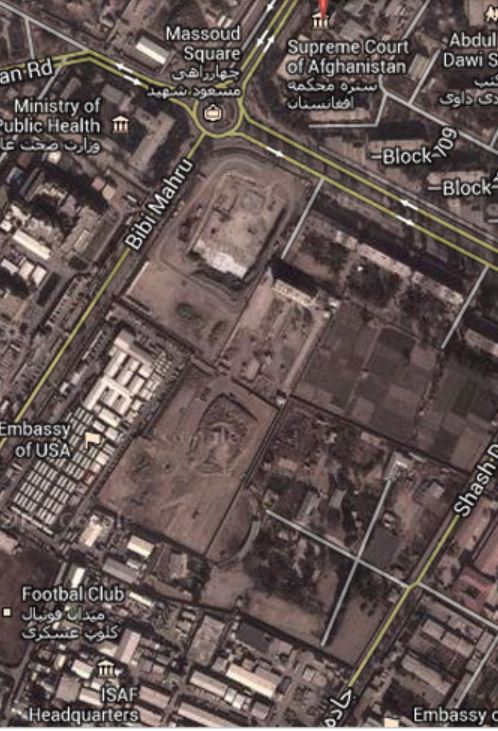 Screen capture of the location of Kabul’s Supreme Court building, showing both the US Embassy and ISAF headquarters nearby.

A very large bomb set off near the Supreme Court building in Kabul has killed at least 14 and injured at least 38. As noted in this report from ToloNews, the toll is likely to rise:

A bomb blast happened at Masud Square near the Supreme Court in Kabul city at 4.15 pm on Tuesday.

“A car full of explosives was detonated at the backside of the Supreme Court compound,” security officials said.

It is said that the car hit three buses which were waiting to pick up the Supreme Court employees. All the buses were badly damaged.

The blast killed 14 people and injured 38 others. Police officials are saying that the number of casualties will increase.

The article goes on to note that the Supreme Court building is near both the US Embassy and ISAF headquarters. Comparing this map with the actual location of the Supreme Court in the Google Maps screen capture above places the Supreme Court adjacent to but not within Kabul’s “green zone” that would usually be considered a safe area. Nevertheless, such a devastating attack merely blocks away from the US Embassy and ISAF headquarters would seem to indicate significant operational capability for whatever group carried out the attack.

Displaying extremely poor timing, the Washington Post chose today to run an article explaining to us that the Afghan insurgency is ineffectual. Relying on yesterday’s successful thwarting of an attack at Kabul airport, the Post informed us that Afghan troops are now poised to defeat the insurgency:

But the raid’s failure also highlighted the Taliban’s inability to represent a major threat to the Afghan state, according to military officials. They say that the insurgents control little populated territory in few regions and have not been able to expand that sway and that Afghanistan’s fledgling security forces are increasingly able to defeat them.

In a statement issued a week ago, a NATO coalition spokesman, Col. Thomas W. Collins, said the Taliban “simply do not have the manpower, capability or coherence in command and control to be considered a strategic threat.”

Yup. No strategic threat here. They’re just able to take out three busloads of Supreme Court employees in the shadow of the US Embassy and ISAF headquarters. Nothing to see here.

I wonder if the concussion from the blast spilled Collins’ afternoon tea.