The 14% Domestic Phone Content Collection under the Illegal Wiretap Program 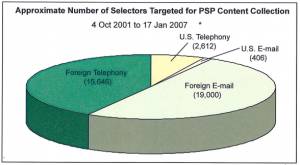 There’s something funny about the claims the NSC Draft IG Report makes.

On page 8, the report notes:

Domestic Collection. The wording of the first authorization could have been interpreted to allow domestic content collection where both communicants were located in the U.S. or were U.S. persons. General Hayden recalled that when the Counsel to the Vice President pointed this out, General Hayden told him that NSA would not collect domestic communications because 1) NSA was a foreign intelligence agency, 2) NSA infrastructure did not support domestic collection, and 3) his personal standard was so high that there would be no problem getting a FISC order for the domestic collection.

Starting in February 21, 2006, DOJ pushed to get a FISC order for PSP collection, in spite of NSA’s numerous reservations. As an interim solution, they changed the definition of “facility” from that of a specific number of email address “to encompass the gateway or cable head that foreign targets use for communications. Minimization and probable cause standards would then be applied.” After months of trying to finesse this, FISC signed two orders to accomplish this:

Remember, domestic content, to the NSA, is content in which both participants are in the US (though at this point NSA may have been distinguishing between citizens and non-citizens). And when they moved to a FISC order, they had a specific order for domestic content. And, as the chart on page 16 shows, 14% of the telephony content was domestic (it was only 2% for Internet, though its number for that collection, 19,000, sure looks awfully round).

Now, apparently, by 2007 when they went to a FISC order, there wasn’t that much domestic collection left.

This says they still had these gateway facilities in place 17 months after PAA passed (and NSA likely dumped it off onto FBI at that point to clean up in anticipation of Obama taking over).