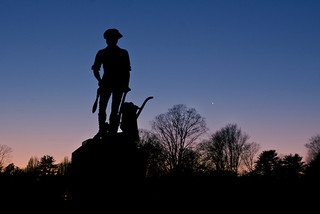 Like Marcy, I find myself pondering today the Declaration of Independence as well as the subsequent system of government set in motion with publication of this influential document.

So much of what our founding fathers protested about the monarchy was the unilateral nature of governance. The signatories quite literally signed their death warrants as they rejected the power of the British crown to govern their lives, so serious were they about the need for self-rule with representation, and oversight to prevent abuses.

Yet here we are, 237 years later, moving toward a unicameral government, witnessing the slow-moving collapse of a democratic republic for which the earliest Americans gave both blood and treasure.

Increasing in number under the last several presidents, the White House has issued classified or secret executive orders and findings—in effect creating law without true oversight by the only body charged with lawmaking, and/or without restraint by the judiciary responsible for ensuring government powers are confined within the limits established by the Constitution.

Congress has failed to adequately exercise its oversight powers to constrain the White House’s execution of laws and and unilateral orders, while permitting departmental employees to lie and misrepresent actions carried out at the orders of the President or subordinate functions.

Congress’s failure to take adequate action with regard to Director of National Intelligence James Clapper’s misrepresentations is but one example. Were the three branches of government truly distinct and acting according their purview, Congress would have demanded an immediate investigation into Clapper’s activities as well as the intelligence functions he oversees, punishing Clapper as appropriate for misleading the people through their representatives.

The judiciary as the third branch has become a rubber stamp function of the plutocracy, set in place by the über-wealthy who co-opted members of Congress with campaign donations, or media sufficient to bully members of Congress to do their bidding. The Court’s composition does not represent the American public, interpreting laws through a perspective shaped and dominated by white male privilege.

That is, when laws find their way in front of the judiciary at at all. Congress and the White House have both created law that deliberate attempts to evade judicial intervention and subsequent review. For example, this recently enacted legislation:

…The so-called Monsanto Protection Act is actually a provision (officially known as Section 735) within a recently passed Congressional spending bill, H.R. 933, which exempts biotech companies from litigation in regard to the making, selling and distribution of genetically engineered (GE) seeds and plants.

President Obama signed the bill and its controversial rider into law in March 2013 much to the dismay of environmentalists. It means that Monsanto and other companies that supply the majority of the nation’s crop seeds can continue to produce GE products regardless of any potential court orders stating otherwise. …” [emphasis mine]

Another effort to bypass the judiciary is noted in the creation and modifications of the REAL ID ACT of 2005. The text of the original bill introduced as H.R. 418 prohibited any judicial review:

SEC. 102. WAIVER OF LAWS NECESSARY FOR IMPROVEMENT OF BARRIERS AT BORDERS.

Section 102(c) of the Illegal Immigration Reform and Immigrant Responsibility Act of 1996 (8 U.S.C. 1103 note) is amended to read as follows:

`(1) IN GENERAL- Notwithstanding any other provision of law, the Secretary of Homeland Security shall have the authority to waive, and shall waive, all laws such Secretary, in such Secretary’s sole discretion, determines necessary to ensure expeditious construction of the barriers and roads under this section.

`(2) NO JUDICIAL REVIEW- Notwithstanding any other provision of law (statutory or nonstatutory), no court shall have jurisdiction–
`(A) to hear any cause or claim arising from any action undertaken, or any decision made, by the Secretary of Homeland Security pursuant to paragraph (1); or
`(B) to order compensatory, declaratory, injunctive, equitable, or any other relief for damage alleged to arise from any such action or decision.’.

Though subsequently modified before passage with regard to judicial review, the current legislation retains authority (under the Executive Branch’s Department of Homeland Security) to waive laws as necessary to secure the nation’s borders. Legitimacy of this language is questionable, but not reviewed as yet by the judiciary.

With each of the three branches of government failing in multiple ways to do the work assigned to each them alone under the Constitution, failing to limit the power of government under the same document which authorizes their existence at the consent of the governed, we should take pause this Fourth of July.

Was it worth 25,000 dead and 25,000 wounded for us to end up with something our founding fathers fought against — an unlimited, unilateral executive retaining concentrated and centralized powers, ineffectively restrained by the people’s representatives, nor limited by the judiciary appointed by the same representatives?

Think about it: we could instead have been lower Canada, with all its so-annoying health care for all.

We could still realize a more perfect union if we remember as a people we are governed only at our consent. To paraphrase the Declaration of Independence itself, I like to believe we the people can still alter this situation to effect our safety and happiness.

I wish you and yours a safe and happy Fourth of July.