Did Umar Patek Lead the US to Osama bin Laden?

Yesterday, Al Jazeera published a leaked copy of the final report from the Abbottabad Commission appointed by Pakistan’s government to investigate both how Osama bin Laden could have lived within Pakistan (on military land!) for so long and how the US was able to carry out its mission to kill him without Pakistan’s military responding in any way.

The report is published as a pdf file of what is clearly a photocopy of the report. The English version has a few translation and/or transcription errors where a word here and there does not make sense. The copy is nearly complete, but Al Jazeera notes that every copy they saw was missing a page in which former ISI director Pasha described conversations Musharraf had with the US just after 9/11.

I’m about a third of the way through reading the report. So far, it has been organized as summaries of the testimony from individuals who had some sort of role at bin Laden’s compound or a role in government or law enforcement that intersected with the event. Each summary of testimony is followed by a bit of reaction from the commission itself, and this reaction can be quite pithy at times. The commission found Shakeel Afridi’s testimony completely unbelieveable, as he claimed to have no knowledge at all that he was working with the CIA. The commission also, in response to the testimony of a lower level local police figure, ascribed the abdication of duty as due to “government implosion syndrome”, adding that “This explains a lot without excusing it.”

What stands out to me in the reading so far is the role that Umar Patek could have played in aiding the US to find bin Laden. Recall that so far, the party line from the US is that bin Laden’s compound was located in Abbottabad by tracing the two couriers who lived there. However, Indonesian bomber Umar Patek was arrested in Abbottabad in January of 2011, just a few months before the May raid by the US.

Here is a bit of the testimony from the Home Secretary of Kyhber Pakhunkhwa Province (so as not to add further transcription errors, I am relying on partial screen captures of the pdf document that is in a form not allowing text to be copied): 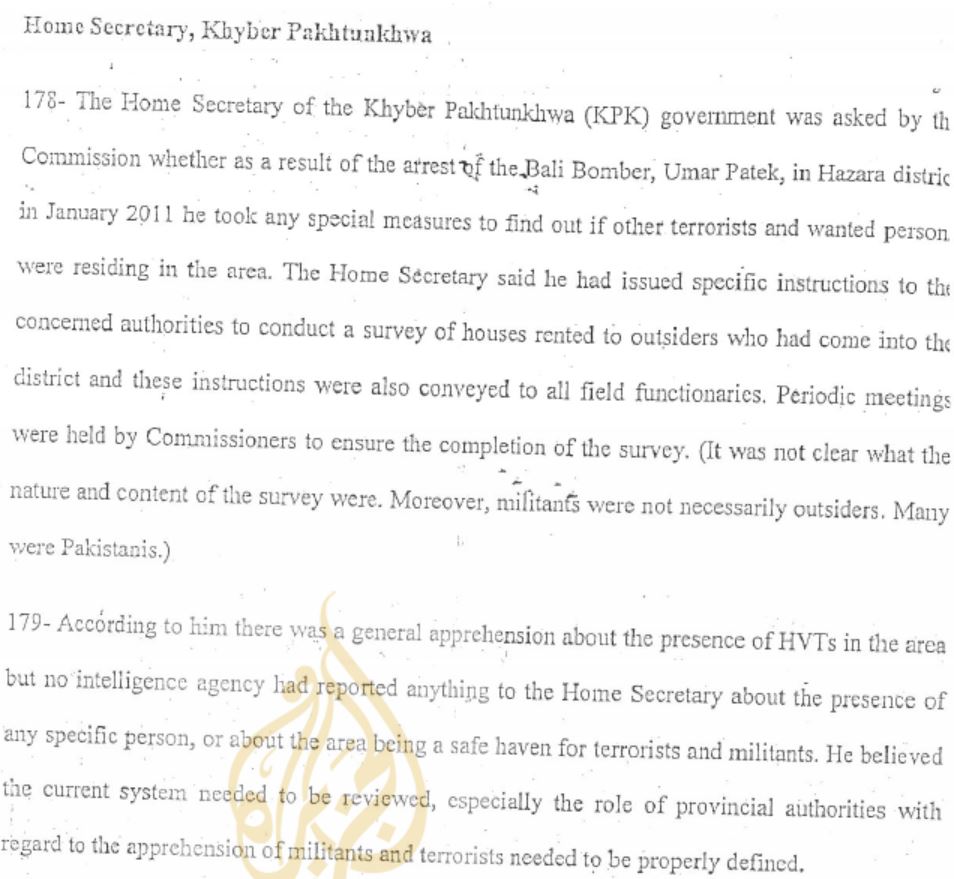 So the arrest of Patek aroused at least some concern, but it was not followed up on. The testimony of the wife of one of the couriers, Maryam, got into a very interesting analysis of the Patek situation, though, with the commission offering some incisive deductions: 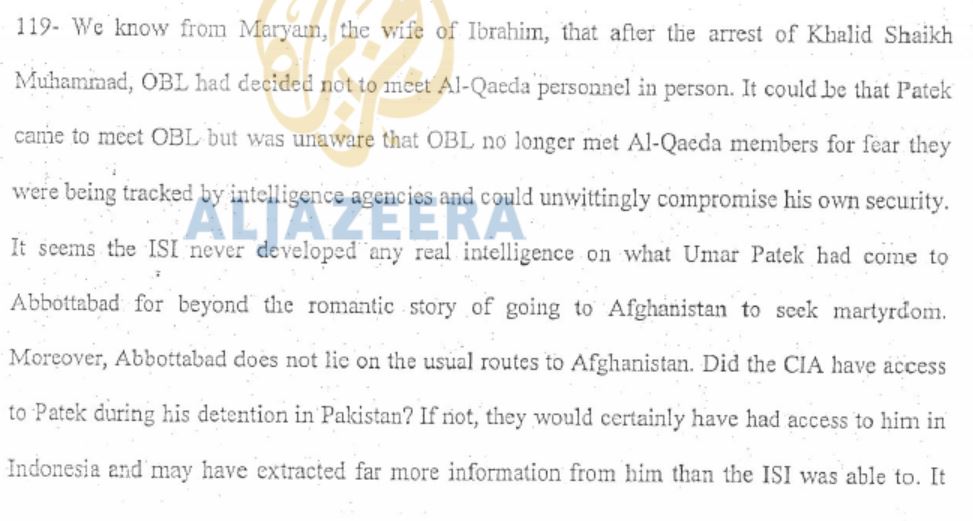 And after a page break:

Almost nobody had paid any attention to Patek’s arrest being so close in time and location to the bin Laden raid. Well, one foul-mouthed blogger did, a year ago this week:

But there’s a question that has, AFAIK, never been answered. Patek was arrested in January 2011 in Abbottabad, Pakistan. There have always been suspicions that the arrest of Patek in the city Osama bin Laden was hidden out in (Patek reportedly planned to meet OBL) helped to solidify the case that he was in fact the “Pacer” in the compound. Did Patek help the US get OBL?

Both Marcy and the commission find the interrogation window for Patek to fit extremely well with the timing of the bin Laden raid. The commission also shows considerable insight in noting that despite the efforts by bin Laden to cut off all interaction with the outside world except for the use of his two couriers, at least one high level al Qaeda affiliate may well have known that bin Laden was in Abbottabad.

While the world focuses on the role of following bin Laden’s couriers, it may well be that Patek provided some of the most actionable intelligence on bin Laden being in Abbottabad.