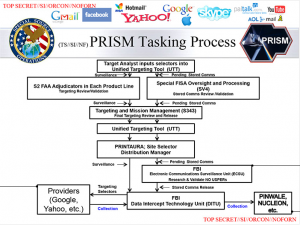 One of the more colorful revelations in today’s Guardian scoop is the newsletter piece that describes increased sharing of PRISM (Section 702) data with FBI and CIA.

The information the NSA collects from Prism is routinely shared with both the FBI and CIA. A 3 August 2012 newsletter describes how the NSA has recently expanded sharing with the other two agencies.

The NSA, the entry reveals, has even automated the sharing of aspects of Prism, using software that “enables our partners to see which selectors [search terms] the National Security Agency has tasked to Prism”.

The document continues: “The FBI and CIA then can request a copy ofPrism collection of any selector…” As a result, the author notes: “these two activities underscore the point that Prism is a team sport!”

But that’s something that has actually been built into the program for years. While the Joint IG Report on the illegal wiretap program claimed,

NSA also was responsible for conducting the actual collection of information under the PSP and disseminating intelligence reports to other agencies such as the Federal Bureau of Investigation (FBI), the Central Intelligence Agency (CIA), and the Office of the Director of National Intelligence (ODNI) National Counterterrorism Center (NCTC) for analysis and possible investigation.

Coordination with FBI and CIA. By 2004, four FBI integrees and two CIA integrees, operating under SIGINT authorities in accordance with written agreements, were co-located with NSA PSP-cleared analysts. The purpose of co-locating these individuals was to improve collaborative analytic efforts.

And the minimization procedures released by the Guardian (which date to 2009), make it clear NSA can provided unminimized content to CIA and FBI on whatever selectors they request.

And none of that should be surprising, given the tasking slide — above — that was first published by the WaPo. FBI, at least, is solidly in the midst of this collection, for a program deemed to be foreign intelligence collection.

There have been a variety of claims about all this team sport participation. But I’m not convinced any of them explain how all this works.

And in perhaps related news, the Fifth Circuit today said that Nidal Hasan could not have access to the FISA material on him, in spite of the fact that William Webster published a 150 page report on it last year. Legally, that material should be utterly distinct from PRISM, since a wiretap on Anwar al-Awlaki would require a specific FISA warrant (and the latest Guardian scoop refers to expanded cooperation since 2012). But I suspect the reason Hasan, the FISA evidence against whom has already been extensively discussed, can’t see it is because we would see what this actually looks like from the FBI side.

DOJ has to protect its team, you know.