Negative Manning Decision and the Future of Investigative Journalism 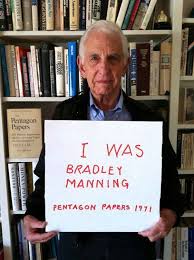 Little more than few hours ago, a critical ruling was handed down by Judge Denise Lind in the Bradley Manning UCMJ prosecution ongoing at Fort Meade. The decision was on based on this motion by the defense seeking dismissal of the “Aiding the Enemy” charge, among others in the prosecution.

To make a long, even if sadly predictable, story short, the motion was denied by Judge Lind and the charge will proceed to determination on the merits. This is, to be sure, a nod to the prosecution (which is actually the standard in such motions for directed verdicts during trials; that is the facts are taken in the light most favorable to the non-moving party, the government). It is also, obviously, a blow to the defense, although undoubtedly an expected one for defense attorney David Coombs. There is a very outside chance of a silver lining I will discuss below.

Julie Tate at the Washington Post sets the table:

The motion to dismiss the charge was filed July 4 by Manning’s civilian defense attorney. He argued that the government had failed to show that Manning “had ‘actual knowledge’ that by giving information to WikiLeaks, he was giving information to an enemy of the United States.” He said the government did introduce evidence “which might establish that PFC Manning ‘inadvertently, accidentally, or negligently’ gave intelligence to the enemy,” but that this was not enough to prove the most serious charge against him, known as an Article 104 offense.

On two separate occasions, Lind, an Army colonel, had questioned military prosecutors about whether they would be pursuing the charge if the information had been leaked directly to The Washington Post or the New York Times. Each time, the prosecution said it would. That troubles advocates for whistleblowers, who fear that the leaking of national defense information that appears online, as it inevitably does, can be construed as assisting the enemy.

If convicted of aiding the enemy, Manning, an intelligence analyst who served in Iraq, could face life in prison.

That describes the motion and the stakes as to Manning. Julie’s article also gives more particulars on the denial this morning, and is worth a read. For a tick tock, please see the continuously good coverage by Kevin Gosztola of Firedoglake.

But as enormous as the stakes are for Bradley Manning, the enterprise of investigative journalism is also on trial, even if in an indirect manner.

Yet another journalist who has tirelessly, and superbly, covered the Manning prosecution, Alexis O’Brien, has written at the Daily Beast, the stakes for investigative journalism are also life and/or death in the face of the security/surveillance state. Citing the in court, and on the trial record, compelling testimony of Professor Yochai Benkler of Harvard Law School, Alexis related:

In a historic elocution in court last week, Prof. Yochai Benkler, co-director of the Berkman Center for Internet and Society at Harvard Law School, told Lind that “the cost of finding Pfc. Manning guilty of aiding the enemy would impose” too great a burden on the “willingness of people of good conscience but not infinite courage to come forward,” and “would severely undermine the way in which leak-based investigative journalism has worked in the tradition of [the] free press in the United States.”

“[I]f handing materials over to an organization that can be read by anyone with an internet connection, means that you are handing [it] over to the enemy—that essentially means that any leak to a media organization that can be read by any enemy anywhere in the world, becomes automatically aiding the enemy,” said Benkler. “[T]hat can’t possibly be the claim,” he added.

Benkler testified that WikiLeaks was a new mode of digital journalism that fit into a distributed model of emergent newsgathering and dissemination in the Internet age, what he termed the “networked Fourth Estate.” When asked by the prosecution if “mass document leaking is somewhat inconsistent with journalism,” Benkler responded that analysis of large data sets like the Iraq War Logs provides insight not found in one or two documents containing a “smoking gun.” The Iraq War Logs, he said, provided an alternative, independent count of casualties “based on formal documents that allowed for an analysis that was uncorrelated with the analysis that already came with an understanding of its political consequences.”

Those really are the stakes in the, now, not all that new age of digital journalism. When the prosecutors in the Manning trial, upon direct questioning by Judge Lind as to whether they would still prosecute Manning if his leaks had been delivered straight to the New York Times or Washington Post, it had to be a wake up call for traditional media. Or so you would think. But, really, the outrage has been far greater over the James Rosen/Fox subpoena that could, and arguably should, be considered relative peanuts.

But, Yochai Benkler is right as to the import of the consideration as to Wikileaks in the Manning case.

In closing, the one slim and thin ray of limited hope from today’s ruling by Denise Lind: If I were Lind and cared at all about the ultimate verdict on Pvt. Bradley Manning, I too would have made this ruling. Why, you ask? Well, because a dismissal on the motion would have been the equivalent of a directed verdict on the law and would be far easier to overturn on appeal than a decision on the merits that the government has not met its burden of proof. Is this possible; sure, it certainly is. Is this likely; no, I would not make any substantial bets on it.