NSA’s PRISM and the Oddity of PalTalk 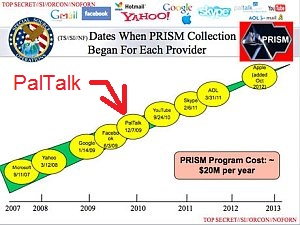 Remember this presentation slide on PRISM from last month’s blockbuster report by the Guardian-UK?

Remember the one outlier right smack in the middle of the slide — the company name most folks don’t recognize?

Very few news outlets tackled PalTalk, explaining what the business is and asking why it was included in the program. There was little more than cursory digging; Foreign Policy looked into PalTalk’s background, while PCMag merely asked in a snarky piece why PalTalk instead of a myriad of other larger alternative social media platforms.

It’s still a good question, but the answer might be right in front of us with a little more analysis.

PalTalk is an “online video chat community,” according to its own description. This means it is in the same competitive space as AOL and Skype, as well as Microsoft’s Hotmail IM and Yahoo Messenger.

The slide we’ve seen doesn’t tell us if access to AOL, Microsoft, and Yahoo was limited to email only, however. We can’t be certain PRISM and the other programs referenced in this particular NSA presentation weren’t also permitted access to live chat environments hosted by these companies. Foreign Policy sidled up to the issue, mentioning Yahoo as well as PalTalk, but didn’t follow through. It’s been relatively easy to see how interest veered away from this question; many news outlets focused on email metadata, not chat.

Squirrel away the unasked, unanswered question(s) about chat someplace for future reference.

With regard to PalTalk, Foreign Policy noted the organization was singular among the companies cited in the NSA slide as it was not a Silicon Valley firm. PalTalk is based in New York. The line of inquiry here went no further.

Hello, New York? This small business is co-located in an AT&T facility in Manhattan, and in New Jersey according the firm’s CEO and founder Jeffrey Katz in a Forbes article dd. 2003 to which FP linked:

“…He rents space in two AT&T data centers, one in Manhattan, another in Secaucus, N.J., with $700,000 worth of computer equipment, including 80 lower-end servers from Dell Computer and five IBM Unix servers. …”

This should raise numerous questions at this point. Manhattan must be an extremely expensive place to run a data center, cheek-and-jowl with financial traffic demanding extremely high uptime. Because of the frequency with which New York was mentioned in published content about PalTalk, the New Jersey location is likely a redundant facility for the purposes of business continuity if the main facility is disrupted.

You’ll recall the last major disruptions to data traffic out of New York were due to Hurricane Sandy and 9/11.

Why would a tiny online video chat community need a data center likely to have world-class uptime and redundancy of a nature a company might need only twice a decade?

Another surprising matter is Foreign Policy’s reference to earlier articles about Paltalk, while missing this key tidbit to which it linked from that same Forbes article:

“ A less savory crowd naturally migrates to such services. Katz reckons that about 5% of his traffic comes from folks using PalTalk to engage in a video-enhanced version of phone sex. But he prefers to talk about wholesome users, like Dennis Hill, a Marine at sea who uses his ship’s Internet connection and PalTalk to reach his dad in Indiana. Or Reza Pahlavi, son of the late shah of Iran, who last year addressed 700 PalTalk subscribers in an online video forum. “We had people from all over the world,” Katz marvels. “What other medium could do this?” …”

Of course the NSA might have some interest in a chat community where many Iranians congregate, especially Pahlavi loyalists.

Which brings us to a question which has been asked in a few different forms: What is it the domestic spying program really looking for in all the data from PalTalk along with the other Silicon Valley tech firms?

Whatever it is, it wasn’t information to put the U.S. ahead of the curve on Arab Spring in Libya, Egypt, or now in Syria. PalTalk access was acquired in 2009; last year, British news outlets reported Al-Qaeda supporters used PalTalk as a venue for planning a bombing scheduled to detonate around Christmas Eve 2010. In spite of likely monitoring of PalTalk after the bomb plot was foiled, U.S. response to Arab Spring and Syria appears to have been rather reactive, not proactive.

An interesting facet of the reporting on the December 2010 UK bomb plot was the images of the suspects used in the reporting. Were some of these mug shots actually low resolution snaps from PalTalk video? Even if this isn’t the case, is it PalTalk’s video component which is most valuable to the NSA? The Telegraph-UK noted in 2010 that PalTalk was the largest online video chat service at that time, offering the ability to participate in multiple chats simultaneously. Was the network of contacts participating in multiple video chats what made PalTalk access critical to PRISM?

Perhaps there’s yet more revelatory information in all the content written to date about PalTalk. It’s worth another look. In the meantime the question remains: why PalTalk?