On Thursday July 25, the ACLU met the government for a hearing in their suit to stop the Section 215 dragnet (which I’ll call ACLU Injunction for this post). While there, the government handed the judge a filing for ACLU’s Section 215 FOIA, asking for more time (until September 15, or maybe longer) before respond in that case; they sent ACLU a redacted copy by letter the next day.

The filing includes a James Clapper declaration written way back on July 7 meant to apply to four or five cases asking for a two month delay on FOIA or related litgation; as far as is publicly known, however, the declaration had not yet been submitted in any of those cases.

The filing (and its redactions) are interesting for several reasons:

It suggests one ongoing case pertains to Section 215 and/or Section 702 surveillance in a way that is not publicly known.

As I said, this declaration pertains to four or five cases. Three of those are named:

But after referencing those suits, the Clapper declaration redacts over a line describing at least one other case. 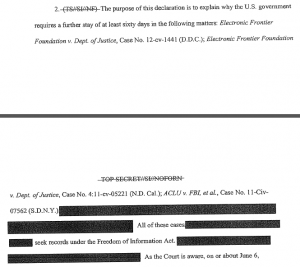 The letter accompanying this declaration includes a footnote explaining,

Given the other redactions — which largely refer to still unacknowledged or undisclosed aspects of the Section 215 and Section 702 surveillance, along with one probable reference to CIA — the name of these case(s) are probably one of those redactions that would be unclassified in other circumstances.

That suggests that it may be the relevance to this issue — the role of Section 215 or Section 702 — that makes the reference to the case classified.

My first guess about what case(s) might be included in that redaction is EPIC’s FOIA suit for materials pertaining to the investigation of supporters of WikiLeaks. As I have described, the government not only withheld everything under an “ongoing investigation” exemption, it also invoked “protected by statute.” But it didn’t say what statute prohibited it from releasing the materials, an unheard of FOIA practice. That suit is awaiting the judges decision on motions to dismiss.

But the redacted case(s) could also pertain to the Internet providers’ efforts to be able to reveal what they’ve turned over under Section 702 (indeed, the redaction right after the word “cases” above, seems to hide a modification distinguishing one of the (or the) redacted case from the FOIA cases listed. While I think some of these requests count as unclassified at this point, the redaction may reflect an attempt to avoid confirming it publicly.

One phrase from an otherwise standard description of the permissible access to the Section 215 dragnet is redacted. Compare this description, included in a July 18 submission in the ACLU’s suit to get an injunction against the 215 collection:

Additionally, the Government is prohibited by the FISA Court’s orders from indiscriminately sifting through the data. The database may only be queried for intelligence purposes by NSA analysts where there is a reasonable, articulable suspicion (“RAS”), based on specific facts, that the query term, or “identifier” (e.g., a phone number) is associated with a specific foreign terrorist organization previously identified to and approved by the Court.

With the description in the Clapper declaration:

While this bulk collection is broad in scope, the NSA has been authorized by the FISC to query the archived telephony data solely with identified telephone numbers for which there are facts giving rise to a reasonable, articulable suspicion that the numbers are associated with particular foreign targets,  [one line redacted] (referred to as a “RAS” determination), and only for the purpose of identifying numbers that have been in contact with these numbers. Bulk telephony metadata collection authorized under FISA remains an important source and method needed to utilize sophisticated analytical tools for tracking communication patterns of known terrorists. [my emphasis]

The closing language of the passage makes it clear that the government still claims queries of the dragnet are limited to counterterrorism (in spite of NSA approval to query Iran). The Clapper declaration gets closer to admitting that the dragnet is about pattern analysis (AKA data mining).

But there’s still something about the approval process for these “known terrorists” that remains classified, at least within this context.

Remember: Basaaly Saeed Moalin’s calls with Somali warlord Aden Hashi Ayrow were accessed two months before al-Shabaab got listed as a foreign terrorist organization. So this access obviously extends beyond those whom the government formally treats as terrorists.

Why the stall? To see how the damage control works

The most substantive redactions appear on page 5-6 in Clapper’s description of the reason for the slow classification review. The introduction to these passages read,

Determining what information can be declassified will also include decisions about how best to protect the still-classified details of sensitive programs that have not been officially acknowledged by the Executive Branch.

Further complicating the declassification process is the likelihood that the government will be faced with additional unauthorized disclosures prior to the completion of the current inter-agency review.

Declassification decisions, therefore, could be affected by further unauthorized disclosures that the government can neither predict nor control.

The first passage must refer to things — like upstream collection and the Internet metadata program that got continued until 2011 (when Clapper wrote this in July it was still unacknowledged) and possibly even (though Clapper himself addressed the issue) the use of the metadata program as a Dewey Decimal system to access information collected under Section 702. The redacted information must refer to things the government is just pretending hasn’t been released in hopes it will go away, perhaps because there is no way to spin it to their advantage. Presumably the government has no intention of turning over under FOIA information pertaining to these issues, even though they’ve become public.

Then there are the expected additional revelations that Edward Snowden already leaked to the Guardian (the redacted passage is maybe 6-8 lines long).

While I’m sure the current inter-agency review process is taking a long time, I do suspect that part of the reason Clapper has asked for delay (indeed, he is now asking for a delay beyond the September 6 date he originally asked for) is because he doesn’t want further Snowden disclosures to embarrass him (again).

As I’ve been tracking, the government likes to pretend Section 215 and Section 702 are unrelated, going so far as to claim that aligning the renewal dates for the FISA Amendments Act and PATRIOT would “risk[] confusing distinct issues.”

But on July 7, Clapper admitted that Section 702 “is distinct from Section 215 but complementary to it.”

Perhaps he’s ready to explain how they complement each other, then?

Below the fold, I’ve included all the developments in the 3 known FOIA suit plus ACLU’s challenge to the Section 215 collection (because the same judge presides over both cases).

April 24: EFF stays proceedings in FISC Opinion FOIA to ask FISC if it can release opinion

June 12: FISC tells EFF FISC has not withheld its own opinions

July 5: Clapper declaration asks for 60 more days to review documents in EFF, EFF, ACLU FOIA, and one or two other cases

July 8: In ACLU FOIA status report, government offers “to submit an ex parte, in camera declaration in further support for its request for an abeyance until September 6, 2013.”

July 12: In joint status report for EFF 215 FOIA, government offers to “submit ex parte a classified declaration in further support for the Government’s request for an abeyance until September 6, 2013; EFF asks for production by August 12