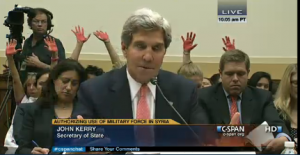 The most interesting details in today’s House Foreign Relations Committee hearing on Syria pertained to money.

First, when asked how much this not-war (for a second day, Kerry insisted this isn’t a real war) would cost, Chuck Hagel said it would cost tens of millions of dollars.

But when Alan Grayson asked whether Hagel would commit that he would not need supplemental funding for it (tens of millions are, after all, a rounding error for DOD), Hagel first said it depended on what options the President chose, then said um no, he couldn’t commit to that.

Finally, very early in the hearing, John Kerry intimated that someone (presumably the Saudis, but we’ve got a lot of rich autocrats in the region who want to oust Bashar al-Assad) had offered to pay the entire price of the operation if we would simply do it. But we weren’t going to take that friend up on the offer.

At this point, I’m not even sure the AUMF can pass the Senate (it passed out of the Senate Foreign Relations Committee with just a 55% yes vote: 10-7-1, which doesn’t bode will for the Senate’s filibuster customs–though that may not matter). But even if it does, the Administration would be well-served to remember they’ve got a debt limit fight coming up.