[As a reminder, it is fundraising week Chez Emptywheel. Please help support our work if you can.]

[special Live Update From the America’s Cup below]
We are only a week into real football and already there is a blockbuster game on tap. The Fighting Irish are going up the country to visit the Big Blue Bo Merlots at the Big House. Lotta B’s in that sentence, but it is hard to give these two teams A’s! (Thanks, I will be here all week, enjoy the veal). Well, at least this game is not in the ignominious class of the 2007 game, which was a scintillating battle of unvictorious and untied loser teams. So, there is that.

Now, what should we expect when expecting this mammoth matchup? For one thing, some great trash talking! And, man, there has already been some prime trashing going on behind the ESPN Gameday set in Ann Arbor. Check out the sign this guy has to greet the blighted Irish:

Hahahahaha, oh man my side hurts. As an extra bonus, the Game Day folks were just discussing the Arizona v. UNLV game, and all picked “Rich Rod’s team”. The boos from the Michigan cognoscenti about shook the earth at the mention of Rich Rod. Some bonus trash from the Big Mitten: Michigan coach Brady Hoke slams Johnny Football by saying the reigning Heisman winner wouldn’t even be starting were he on the Big Blue. Whoa! Also, Notre Dame, in apparently the only way they could find to show that they can rock and roll, have added Bon Jovi’s kid as a walk on cornerback on their roster.

Since the NCAA put in their overtime rules, I guess someone has to win this game. My friend Armando (who weekly does a series of picks at Talk Left) has the Domers and the 4 points. Naw, Big Blue all the way baybee! Also on tap today is Jim White and Armando’s Florida Gators hooking up in South Beach with the Miami Hurricanes. This game is far from what it once might would have been, but still could be good. Canes in a big home upset. The other really sweet matchup is South Carolina at Georgia. Clemson clocked the Bulldogs in the first week. Hard to see the Dawgs going 0-2 to start the year, but I am rolling with the ‘Ole Ball Coach and his Cocks.

Well then, off to the NFL we go. The only game of note in the pros is The Cheese versus The Niners. Is san Fran as good as they looked last year? Does Colin Kaepernick have too many weapons now that he has Anquan Boldin to go with Vernon Davis and Frank Gore et. al? Who in the world is playing on Green Bay’s offensive line at this point and what will the Pack do for a QB when Aaron Rodgers gets his clock cleaned because of that porous O-Line? This REALLY pains me to say it, but Niners roll at home.

Couple of other pro games of note, namely the Sunday and Monday Night games. SNF is the Gents at the Owboys. Jerry Jones says he is so excited he has insomnia. Think Good Eli will show up to give Jerry indigestion too? Not me, nope this is early in the season and the Cowboys will dredge up some more usual hollow hope for the hometown. But they play again, and Eli will own that one. On MNF we have teh Iggles at the Skins. The much awaited debut of the Chip Kelly Quack Attack run by Mike Vick in the NFL, and the return of the rebuilt RGIII. This is a very tough call. Slight edge to Skins because they are at home, Kelly needs time to have his offense gel and Philly’s defense is a question mark. If vick stays healthy and productive though, watch out. A real sleeper game is the Cardinals at the Rams. Both teams are WAY improved. Watch out for Larry Fitzgerald now that he has Carson Palmer instead of a string of scrubs throwing to him, and the Card’s defense should be solid once again.

Lastly, this weekend is the Italian Grand Prix. There are a few MUST watch races on the Formula One calendar, and Monza is at the top. It always is, but there may be weather Sunday, which could seriously skew things and turn it into really compelling theatre. I was up for qualifying this morning and am sad to report the Red Bulls, led by Sebastian Vettel, have locked out the front row. Nico Hulkenberg surprisingly got his Sauber into P3, with Felipe Massa and Fernando Alonso in P4 and P5 respectively. The buzz everywhere is that this race, at effectively Ferrari’s home track, will likely decide Massa’s future. Out qualifying Fernando is a good start, but the result is what will matter. Massa is almost certainly driving for his future in F1 at all with Kimi Raikkonen’s potential return to Maranello lurking. The one thing in Massa’s favor is that Alonso wants no part of Kimi returning to the fold. Should be an interesting race and it goes off at 8:00 am EST on NBCSports.

THIS JUST IN: SPECIAL LIVE UPDATE FROM THE AMERICA’S CUP RACE! 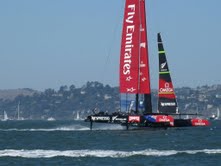 This is from our very own fearless Emptywheel Roving Reporter Rosalind, hot off the wires!

“Greetings Wheelies! it is I Rosalind, Roving Reporter. The Emptywheel
assignment editor forced me to spend the weekend in San Francisco. Temp in the 80s, clear blue skies, giant boats flying across the water. Good times.

When we last met, I was waxing rhapsodic over the America’s Cup Sailing races finally coming to San Francisco, one of the most perfect natural venues for a sailboat race. Alas, Larry Ellison, Mr. Oracle, as defender of the Cup got to chose the new boat design and went with a radical new approach: giant catamarans with towering fixed wings that can go really really fast – 50 mph fast – but are wickedly unstable in the SF Bay conditions. 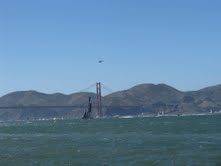 Two destroyed boats and one crew member’s death later, the official America’s Cup finals kicked off today, after a summer Challenger series where the only suspense was which boat was gonna break down first. Truthfully. I really wanted to blow off this trip, but you know how stern the EW taskmaster can be. So here I am, in glorious weather surrounded by tourists from around the World and SF citizens from all about and happy happy shopkeepers loving the influx of customers. The races are free to all, just head to the waterfront and pick a spot. Grandstands free for the public are near the Marina Green. 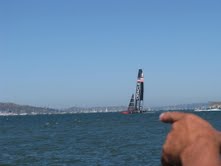 A relative treated me to a reception last night at the St Francis Yacht Club where the Italian engineers responsible for figuring out Computational Flow Dynamics made a lot of sense for why this new Wing technology will have other applications and is a great advancement, but they had an open bar and well, I’ll have to get back to you on that one….

The New Zealand boat looked scary good today, the boat was just flying over the water. The Oracle boat looked off its game from the get go. They lost a crew member over the side per-race, and it went down for, there. They had a rip in their Wing that they patched with Duck Tape (hee…h/t EW)

That is it for this sporting weekend ladies and gents. There are a plethora of games and things to talk about, and let’s get to it in comments. Music this week by, of course, a Michigan man, Bob Seger and his Silver Bullet Band, with the classics Travellin Man and Beautiful Loser. Wonderful tunes if you have not heard them in a while.