Pitiful “Moral Victory” for ANSF: “Mostly Survived” and “Didn’t Give Back All Gains” 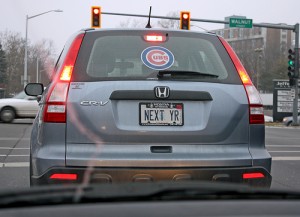 Maybe ISAF can borrow this tag for vehicles in Afghanistan. (Photo courtesy of myoldpostcards via Creative Commons License on flickr)

I’ve noted before how the “fighting season” in Afghanistan is viewed by the Pentagon in terms that are eerily parallel to baseball season, but the end of season reviews this year have sunk to a pitifully low level as military leaders cast about for anything that can be viewed as a positive sign to take away from the season that is winding down. In today’s New York Times, the season review has sunk lower than any diehard Cubs fan’s version of “wait until next year”:

Some American and Afghan commanders characterized a kind of moral victory for the Afghan forces: they mostly survived, and they did not completely give back gains from past Western offensives.

True to form, the article opened by presenting the “fighting season” framing:

When the Taliban announced the beginning of their spring offensive, they saw few limits to their ambitions: to kill top Afghan officials across every major ministry, to plot even more infiltration attacks against Americans and to bloody, break and drive off the Afghan security forces who were newly in charge across the country.

Now, Afghan and American officials are cautiously celebrating a deflation of the Taliban’s propaganda bubble, the militants’ goals largely unmet.

With this year’s fighting season nearly over, the officials say the good news is that the Afghan forces mostly held their own, responding to attacks well and cutting down on assassinations. But at the same time, the Afghans were unable to make significant gains and, worse, suffered such heavy casualties that some officials called the rate unsustainable.

So, in other words, the Taliban team was really cocky coming out of spring training and felt like they could win it all. Their arch-rivals ANSF instead played them to a standstill, with neither team making the playoffs yet again. And the ANSF team is in dire danger of being seriously depleted next spring.

The review coming from manager Joseph Dunford at the ISAF team website is no better:

While the ANSF are making real progress in security, the challenges faced by Afghans and the international community are primarily psychological and political. There is still widespread uncertainty amongst the Afghan people and in the region concerning the post-2014 environment. This uncertainty causes unhelpful hedging behavior. The overall perception of security is affected by the Taliban’s high profile attacks (HPAs), which is nothing more than a campaign of fear, murder and intimidation. ISAF’s current focus is to enable the ANSF to emerge from this fighting season confident and credible in the eyes of the Afghan people; this will create the perception of security that will support the political process and lead to successful elections in 2014.

If only that damned commissioner’s office would quit screwing around with league alignment, we’d win it all! Honest!

But all jokes aside, when military sources providing quotes to the Times can only speak of “moral victories” and when the commander of US forces has as his goal “the perception of security”, the battle is already lost.