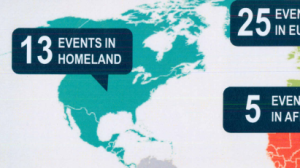 To accompany its excellent piece on the NSA’s Zombie Lie about having prevented 54 terrorist attacks, ProPublica republished the map NSA released to seed the Zombie Lie (visual aids help with propaganda, I understand).

I noticed for the first time how the NSA has simply incorporated Canada and Mexico into the “Homeland.”

I wouldn’t have mentioned it at all, but one of the events they’re almost certainly including among the 13 is the Manssor Arbabsiar “plot” to kill the Saudi Ambassador. That plot, at least as DEA’s informant crafted the tale, involved targets in Argentina, too (and, of course, the plotting took place in Mexico).

Though perhaps the most telling aspect of the whole map is how the whole terrorism thing goes blank once you get south of Mexico. There, of course (and in Mexico as well), we’re stopping “Narcoterrorists,” not “terrorists.”

Finally, it’s funny that NSA is so inaccurate with their maps, given that some of their spying depends on boundary arbitrage, the placement of collection points outside of the US, so it can collect US person data while pretending not to.