Why Would Woodward Leak Confirmation of US-Pak Collaboration on Drone Strikes While Sharif Was in DC? 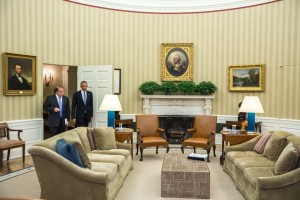 So Obama would not address the drone issue directly in his public remarks. But it seems that Sharif was not particularly enthusiastic in his obligatory public denouncement of drone strikes:

Aside from the reference to drones — delivered in a tone so soft that reporters in the room strained to hear him — Mr. Sharif also sounded conciliatory. Terrorism, he said, was a shared threat that required “serious and sincere efforts without indulging into any blame game.”

It needs to be kept in mind that both Barack Obama and Nawaz Sharif were elected after the agreement to allow drone strikes inside Pakistan was made. The first strike occurred in 2004. Goerge W. Bush was the US president and Pervez Musharraf was the leader of Pakistani military coup that had seized power several years earlier. Because of that, the current distinction between Pakistan’s politically powerful military and its civilian rulers did not exist then.

The memos themselves, which have not been posted as far as I can tell, appear to have come from the US Counterterrorism Center. Some appear to have been prepared as talking points for Michael Morell, who was Deputy Director of the CIA at the time, for then-Pakistani Ambassador Husain Haqqani.

At the end of the article, the most detail is provided on a briefing from Morell to Haqqani on evidence the US had gathered on Pakistan’s military tipping off terrorists to US knowledge of a site where bombs were being constructed:

But Morell was also sent on occasion to confront Pakistan with what U.S. officials regarded as evidence of the nation’s support for terrorist groups. In June 2011, he arrived at the embassy with videos showing militants scrambling to clear materials from explosives plants that the United States had discovered and called to the attention of counterparts in Pakistan.

Rather than launching raids, the Pakistanis were suspected of tipping off the militants, who dispersed their materials in a “pickup truck, two station wagons and at least two motorcycles to multiple locations in South Waziristan,” according to the memo summarizing the meeting with Morell.

Morell warned that “these videos left a bad taste” among lawmakers and other senior officials in Washington.

Missing from the Post story is the crucial context for this particular briefing. Recall that the US raid to kill Osama bin Laden was on May 1 of 2011 and so this June 2011 meeting was not long afterward. Just a few short months later, Husain Haqqani would eventually get caught up in Memogate and resign over his role in helping to develop a memo to the US military seeking US help against a potential coup by Pakistan’s military. The memo to Michael Mullen was dated May 10, so a June briefing in which the US provided Haqqani with video evidence of Pakistani terrorists being tipped off to move materials could be seen as providing the Gilani government with ammunition against the military at a critical moment. So while on the one hand, the evidence provided to Pakistan provided fodder for US politicians to have a “bad taste” for providing billions in aid to Pakistan, an argument can be made that the briefing also was helping to hold off any moves against the civilian government by the military.

In the end, the simplest explanation for the timing for Woodward to publish these leaks is to provide a fresh opportunity for Congress to intervene and cut off flow of the $1.5 billion in funding to Pakistan that Obama announced would finally begin flowing after interruptions caused by the bin Laden raid, the Raymond Davis incident and the killing of Pakistani soldiers in a US air strike near the border with Afghanistan. The CIA especially would look good for the leak since the documents provided to Woodward came from the CIA.

However, just as the private briefing to Haqqani in June of 2011 may well have been designed to support the Zardari government, the Woodward Law in this case may have authorized the leak to support the Sharif government. One of the most important decisions that Sharif will make is coming soon. The head of Pakistan’s military, Ashfaq Kayani, will retire in November and Sharif must choose a replacement. Having in hand firm evidence of the military’s role in working with the US on drone strikes gives Sharif significant leverage over the military and its new head.

And right on schedule, while I was writing this, Gilani has now come out with a denial that he ever approved of drone strikes. In this case, the AFP article carried by Dawn cites a Wikileaks cable with a purported quote from Gilani incriminating him as approving of strikes that hit the “right people”. That’s quite different from the bulk of the evidence Woodward cites, where it seems to be primarily military and ISI personnel who are involved in the strikes. The article also carries an interesting new approach by Pakistan’s foreign ministry:

A Pakistani foreign ministry spokesman said the anti-drone stance of the Sharif government, elected in May, was clear and any past agreements no longer applied.

Hmm. Maybe the new approach will be to look forward and be totally against drone strikes now that the backwards looking approach of tacitly agreeing and publicly opposing has been fully exposed. Looks like a chance for Pakistan to go eleventy dimensional on Obama.