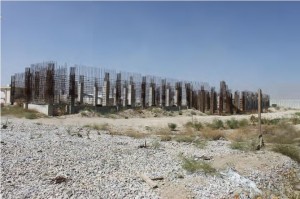 It does seem that 155 days is a very short time frame for a construction project of over $2 million, especially if engineering and concept design are also included. But CLC fell behind immediately and what work they did was ridiculously incompetent:

Our site inspection on May 15, 2013, found that construction of the 2-story JCIP courthouse was incomplete and that the overall quality of CLC’s workmanship was poor and could result in structural failures. Our inspectors estimated construction was about 15 percent complete and was limited to several exterior walls, concrete footings,6 concrete supporting columns, and rebar placement.

It appears that the oversight officer assigned to the job was not up to the task, but the contracting agency claimed he was qualified:

So, good old JTF-435, the group responsible overall for prisons in Afghanistan, had authority over this project and assigned the COR. They had no trouble getting their $60 million prison facility built and opened, but they just couldn’t be bothered to make sure the courthouse got built, so they assigned oversight to someone who couldn’t do the job.

It just seems that US only cares about imprisoning people in Afghanistan, not processing them through the courts. Recall that the handover of the Parwan prison itself to Afghan control has been delayed many times because the US wants some prisoners detained indefinitely without a court review. It should come as no surprise, then, that the courthouse construction project languished and died under JTF-435 control.