Angry Mom and First Principles: What is the Nature of a Broken Lock? 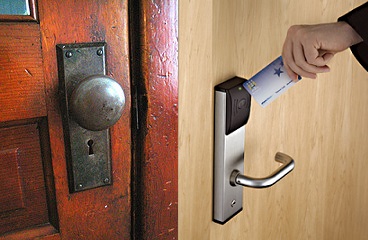 The NSA has quite simply broken into every consumer electronic device used for communications, and their attached networks. When the NSA was forced to do offer explanations for their actions, they fudged interpretations of the Constitution and laws in order to continue what they were doing. Their arguments defending their behavior sound a lot like a child’s reasoning.

But there might be something bad going on behind the door.

But we might need something behind the door in the future.

But we can get behind the door if we ask our close circle of select friends to check our permission — they’ll keep our secrets, just trust us, we’ll be good, honest.

But we have the authority to be everywhere when we deem it necessary, without asking first.

And so on. The only argument we haven’t seen yet (and might yet see) is a full-blown, screaming-kicking-body-on-the-floor tantrum amid cries, But we wanna’ do it!

President Obama’s statement Tuesday suggests that the NSA has now resorted to the arrogant “You’re too stupid to understand these cool tools we’ve made, so we can do it until you get smart enough to stop us” defense. Granted, members of Congress and the judiciary have repeatedly proven their ignorance about technology. The NSA’s leadership — including Keith Alexander, with a career’s experience in spying technology and multiple master’s degrees under his belt — is fully aware of the disparity between their technical prowess and that of U.S. elected officials. They make use of this knowledge to fend off focused questions.

Like whether the NSA broke the locks on the doors of ALL electronic communications-generating devices, and the networks supporting them.

Let’s simplify the problem of NSA’s data collection processes scooping up metadata from innocent, non-target/non-suspect individuals, the collection of their locations based on cellphone use, the apparent snooping through email and other documents conveyed and stored in social media providers like Yahoo and Google.

These are all phones.

All these devices are used to convey communications data — information in bits, whether audio, visual, text, so on — from one individual to another, over networks both hardwired and wireless. Wiretapping of telephones was supposed to require a search warrant showing probable cause.

But the NSA has disregarded users’ long-held expectations of privacy and security in their communications. The NSA doesn’t care whether it’s a plain old telephone service (POTS) hardwired phone, a cellphone, a WiFi-enabled tablet/netbook/laptop/personal computer. They don’t care if you’re on cable, fiber, wireless service. Whatever expectations about privacy the public believed were reserved for anyone of these electronic devices and supporting networks — more so for communications based on voice over POTS — the NSA has chosen to ignore them just as they have ignored the locks on the doors.

When forced to explain why they have ignored individuals’ rights to privacy and security, they use the same childish explanations — see above. The only new spin is their segregation of electronic devices not identified as POTS or hard-wired telephones; they’ve chosen to ignore the fact that voice communications are now conveyed using a much broader range of devices.

But we have authority to access these devices because they’re not really telephones.

But we can tap these not-telephone devices because they are overseas, and anybody and everybody overseas is fair game, whether Chancellor or Pope.

While it’s absolutely necessary that both the public and their elected officials become more technically savvy in order to see through the NSA’s bullshit and develop better policy, regulations, and oversight, it’s also essential that the public and their representatives remember first principles while considering the NSA’s overbroad spying:

It is what it is on the face of it:

Some folks at the NSA, White House, and Congress needs a time-out for their inability to grasp the rather simple nature of this failure and put an end to this mess. I’m *this close* to suggesting a spanking instead.