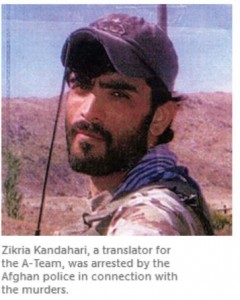 That “we lost contact with him” is just one of the many lies put out by the military about this entire series of events. Look at what Aikins uncovered, just by finding Facebook traffic from the A-Team involved (but note that this moves Kandahari’s disappearance back to December from the previous accounts that put it in January):

“The SF guys tried to pick him up, but he got wind of it and went on the lam, and we lost contact with him,” an American official said of Kandahari in The New York Times in May. And yet after Kandahari left COP Nerkh, and as the A-Team was pressured to account for the missing men, he kept chatting with Woods and other members of the team over Facebook. On December 20th, Woods wrote on the page of his other interpreter, Hanifi, whose nickname was Danny, “when you coming back?” to which Kandahari wrote back, “he has no answer for that now Woody.” Woods replied, teasing Kandahari about his fugitive status, “Shit, they ain’t looking for Danny.” “Hahahah,” Kandahari wrote.

On April 29th, a month after the A-Team had been forced out of Nerkh by the Afghan government, and several weeks after the first bodies had been unearthed near the base, Woods posted a thank-you note on his Facebook page, naming several interpreters, including Kandahari and Hanifi. “Words can’t describe how fucking proud I am of every single one of you guys!” Woods continued, “We fucked up the bad guys so bad nonstop for 7+ months that they did everything they could to get us out of Wardak Province.” He ends with a reference to the motto of the Desert Eagles: “PRESSURE, PERSUE, AND PUNISH!!!” The same day Kandahari commented: “same back to you and all 3124 Woody. and i did what i had to do for my friends and my old team.” Both Woods and another A-Team member liked Kandahari’s comment.

The crimes carried out by this team were a major part of why several months ago I began referring regularly to these A-Teams as death squads. Aikins’ research shows that they have indeed earned that name. But note that one aspect of how these teams have been built and used in Iraq and Afghanistan is their reliance on massive surveillance. Here, for example, is Marc Ambinder in an article shortly after bin Laden’s death:

When Gen. Stanley McChrystal became JSOC’s commanding general in 2004, he and his intelligence chief, Maj. Gen. Michael Flynn, set about transforming the way the subordinate units analyze and act on intelligence. Insurgents in Iraq were exploiting the slow decision loop that coalition commanders used, and enhanced interrogation techniques were frowned upon after the Abu Ghraib scandal. But the hunger for actionable tactical intelligence on insurgents was palpable.

The way JSOC solved this problem remains a carefully guarded secret, but people familiar with the unit suggest that McChrystal and Flynn introduced hardened commandos to basic criminal forensic techniques and then used highly advanced and still-classified technology to transform bits of information into actionable intelligence. One way they did this was to create forward-deployed fusion cells, where JSOC units were paired with intelligence analysts from the NSA and the NGA. Such analysis helped the CIA to establish, with a high degree of probability, that Osama bin Laden and his family were hiding in that particular compound.

These technicians could “exploit and analyze” data obtained from the battlefield instantly, using their access to the government’s various biometric, facial-recognition, and voice-print databases. These cells also used highly advanced surveillance technology and computer-based pattern analysis to layer predictive models of insurgent behavior onto real-time observations.

So, Woods’ conversations with Kandahari on Facebook (Michael Woods is a warrant officer and member of the A-Team in question) can’t be blown off as something higher-ups in the military wouldn’t have known about. The heart of US operations in Afghanistan depends very strongly on “advanced surveillance technology” with the NSA involved. Once Kandahari was officially being sought, his communications should have been receiving special attention. And yet, he was able to have routine Facebook communication with his team and nothing came of it. Remember that it was the Afghans, and not the US, who eventually arrested him. It is impossible to come to any conclusion other than that the military was allowing Kandahari to remain “missing” and could have found him very easily had they wanted.

But here is the most infuriating aspect of all regarding what we have learned of these horrific war crimes: as the drawdown of US forces continues in Afghanistan, these types of Special Operations teams will be playing an even bigger role:

Even as the number of American troops will be cut in half from 68,000 by next February under President Obama’s withdrawal orders, the number of Special Operations forces will remain the same through the Afghan presidential election, which is scheduled for next spring, but could be delayed until closer to December 2014.

While the bulk of the American and allied conventional forces remaining in Afghanistan will make the transition to a support role — and will be increasingly based at large military headquarters — the 10,000 American Special Operations troops will continue to be deployed alongside Afghan units. (Including NATO and coalition troops, the total Special Operations deployment here numbers 13,700.)

“That partnering is rock solid, and we hope over time to come up off the tactical level,” General Thomas said. But he noted that Afghan and NATO leaders all understand the critical importance of assuring that next year’s elections are credible and secure. “So we’re probably going to stay a while longer at the tactical level than we were considering a year ago,” he added.

Whether US troops remain in Afghanistan after 2014 is dependent on achieving criminal immunity for those troops. Why would Afghanistan ever agree to immunity for the very types of forces whose behavior has been confirmed to be criminal?