We are going to take a little detour in our weekly lighthearted football trash talk here at the Emptywheel Blog. I will return to the actual games at the end of this post, but for now I want to discuss a hideous and, hopefully, transformative moment in football – the abusive workplace environment to which the Miami Dolphins subjected Jonathan Martin.

As you may know by now, Jonathan Martin is the second year Miami Dolphins offensive tackle who has left the team because of harassment, primarily by fellow offensive lineman Richie Incognito, but apparently by other teammates as well.

The official statement by Martin’s lawyer, David Cornwell (a fantastic attorney by the way), gives a pretty fine synopsis of the situation:

Jonathan Martin’s toughness is not at issue. Jonathan has started every game with the Miami Dolphins since he was drafted in 2012. At Stanford, he was the anchor for Jim Harbaugh’s “smash mouth” brand of football and he protected Andrew Luck’s blind side.

The issue is Jonathan’s treatment by his teammates. Jonathan endured harassment that went far beyond the traditional locker room hazing. For the entire season-and-a-half that he was with the Dolphins, he attempted to befriend the same teammates who subjected him to the abuse with the hope that doing so would end the harassment. This is a textbook reaction of victims of bullying. Despite these efforts, the taunting continued. Beyond the well-publicized voice mail with its racial epithet, Jonathan endured a malicious physical attack on him by a teammate, and daily vulgar comments such as the quote at the bottom. These facts are not in dispute.

Eventually, Jonathan made a difficult choice. Despite his love for football, Jonathan left the Dolphins. Jonathan looks forward to getting back to playing football. In the meantime, he will cooperate fully with the NFL investigation.

That was on top of the fact direct racial animus evidencing epithets from Incognito to Martin were already known to be in play.

This is beyond ugly conduct, and, frankly, beyond simple “harassment”. Worse, it appears that it was a pattern of conduct not only encouraged, but requested by Dolphins’ management. They ordered a code red on Jonathan Martin.

Jason Whitlock had a very provocative take on the effect of incarceration and thug culture in general at play, a take that rings all too, uncomfortably, true. Dave Zirin at The Nation has a fine take on what the “Bully Solidarity” of the Dolphins organization in the Martin matter means.

So, this hideous and intolerable conduct is legally actionable against Incognito (and the Dolphins via vicarious liability) by Jonathan Martin, right? Sure, anybody can sue anybody else, and Martin can certainly bring a civil complaint here. But the chances of success are far more tenuous than you likely think (and far more difficult than ESPN’s legal idiot, er expert, Lester Munson thinks).

The most common theory mentioned is workplace discrimination, presumably under a Title VII racial animus hostile work environment claim. But this statement of the elements, and discussion of a somewhat similar factual scenario in Carpenter v. Con-Way Central Express, Inc., 481 F.3d 611 (8th Cir. 2007) displays the difficulty Martin faces on this theory:

To establish a Title VII race-based hostile work environment claim, a plaintiff must show (1) he is a member of a protected group, (2) he is subjected to unwelcome race-based harassment, (3) the harassment was because of his membership in the protected group, and (4) the harassment affected a term, condition, or privilege of his employment. Singletary v. Mo. Dep’t of Corr., 423 F.3d 886, 892 (8th Cir.2005). A hostile work environment “is permeated with discriminatory intimidation, ridicule, and insult that is sufficiently severe or pervasive to alter the conditions of the victim’s employment and create an abusive working environment” as viewed objectively by a reasonable person. Tademe v. Saint Cloud State Univ., 328 F.3d 982, 991 (8th Cir. 2003) (internal quotation omitted). “To be actionable, the conduct complained of must be extreme in nature and not merely rude or unpleasant.” Nitsche v. CEO of Osage Valley Elec. Coop., 446 F.3d 841, 846 (8th Cir.2006) (citations omitted). “Allegations of a few isolated or sporadic incidents will not suffice; rather, the plaintiff must demonstrate the alleged harassment was `so intimidating, offensive, or hostile that it poisoned the work environment.'” Id. (quoting Tuggle v. Mangan, 348 F.3d 714, 720 (8th Cir.2003)).

Hardy’s racial insults were not shown to be connected to Hardy’s misloading of or placing garbage in Carpenter’s trailer. Carpenter testified Hardy “was an instigator to everybody” who “would instigate problems” such as “do[ing] things . . . intentionally” to “piss a driver off” and then run down the dock telling everybody he had just done something to someone’s trailer. J.A. 98. While Carpenter was a favorite target of Hardy’s childish pranks, another employee testified Hardy played a practical joke on somebody “about daily.” J.A. 253. This evidence does not show objectively hostile conduct. See, e.g., Singletary, 423 F.3d at 892-93 (finding job environs where the plaintiff had second-hand knowledge his co-workers and some managers referred to him as a “nigger” and where his vehicle had been vandalized on several occasions not objectively severe and pervasive); Bainbridge v. Loffredo Gardens, Inc., 378 F.3d 756, 759 (8th Cir. 2004) (finding racial remarks, made directly to plaintiff, once a month for two years by owner and operators, was insufficient to render the workplace objectively hostile).

That is pretty common law across the various circuits from what I can tell, is generally consistent with what I have seen in the past in the 9th Circuit, and should hold in the 11th Circuit which covers Florida. It certainly does not preclude such a claim by Martin, but shows the burden he will be up against. And keep in mind the environment in Carpenter was far more benign and less testosterone and violence oriented than an NFL workplace, and such facts matter in a relative consideration of the claim, and circumstances of alleged discrimination.

The wrongdoer’s conduct was intentional or reckless;

The conduct was outrageous, that is, as to go beyond all bounds of decency, and to be regarded as odious and utterly intolerable in a civilized community;

The conduct caused emotional distress; and

The emotional distress was severe.

And Florida appellate law, which would putatively control such a claim even in Federal Court, is fairly strict:

Only conduct, which is “so outrageous in character, and so extreme in degree, as to go beyond all possible bounds of decency, and to be regarded as atrocious, and utterly intolerable in a civilized community,” meets the standard necessary to state a claim for IIED. Clemente v. Horne, 707 So.2d 865, 867 (Fla. 3d DCA 1998), citing Restatement (Second) of Torts, § 46 cmt. D (1965). “It is not enough that the intent is tortuous or criminal; it is not enough that the defendant intended to inflict emotional distress; and it is not enough if the conduct was characterized by malice or aggravation.” Id. citing State Farm Mut. Auto. Ins. Co. v. Novotny, 657 So.2d 1210, 1213 (Fla. 5th DCA 1995).

So, to make a long story somewhat shorter, and not delve too deeply into legal minutiae when there is not even yet a complaint to analyze, the litigation chances of success are certainly far from clear cut. And the types of “hey, NFL boys will be boys” defenses were aptly shown in the “Bully Solidarity” piece by Zirin.

But the Dolphin code red run on Jonathan Martin is but a symptom of a larger problem, the disposable gladiator thug mentality showcased and lionized by the NFL. From the NFL, by far the most popular sport in America, it oozes into the fabric of society. And the NFL has already shown its craven, arrogant, scorched earth litigation tendencies by their despicable strategy in the CTE (chronic traumatic encephalopathy) case brought by former players who are increasingly shown to be decimated by the NFL lifestyle.

The NFL does not just “have” a problem, they “are” the problem. The NFL does not just condone the thug life, they encourage it and sell it for profit. The way the NFL, and the Dolphins, have responded to date to the Jonathan Martin case is deplorable. If they have an ounce of social righteousness and moral ethics, they will allow their “special investigator” Ted Wells to do a real investigation with an eye toward cleaning up the league. It is the least they can do.

But don’t hold your breath. As Whitlock says:

It’s now time for Roger Goodell to render a verdict on wardens Ireland and Philbin and Cell Block D leader Incognito. The world is so upside down that I half expect Goodell to suspend Martin for conduct detrimental to American idiocy.

Yep, that’s about right. Especially when it comes to Roger Goodell and the NFL. 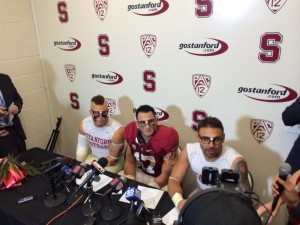 Okay, I promised some actual trash talk. Away we go. In the biggest game last night, the Stanford Tree blew up the Quacks from Oregon. The nerds of Stanford showed in the post game press conference as shown to the right. The Tree deserved the win, though it undoubtedly will keep the Pac out of the BCS Championship Game yet again. Seriously, I have no idea how anybody could rate the cheap undefeated record of Ohio State over the one loss Tree. The Pac is simply a lot better conference than the B1G now and, top to bottom, may well be better than the SEC. Baylor left a mark on the Sooners and the Vikings beat the hapless Redskins (how can Shanahan still have a job after this year?).

Saturday’s best game is unquestionably LSU at the Tide in Tuscaloosa. Short of a run in with Johnny Football in the SEC Championship, this is the best shot for a loss by Bama. Sorry, not happening. ASU visits the Utes of Utah, who managed a home win against Stanford earlier in the year. The Devils are on a little roll; I am going out on a limb and predicting they take care of Utah.

For the pros on Sunday, Lions at Bears is the class of the bunch. Cutler and his groin are cleared to play. I am sure he will, but I would stick with Josh McCown were it me; Cutler is not 100% and the Man Named Suh will be chasing him. Eagles at the Pack is suddenly far more a close call without Aaron Rodgers, take the Iggles in an upset. Oakland ant the Giants ought to be a fair fight between teams that can’t get out of their own way. If the Bengals beat the Ravens in Baltimore, they may take control of the division for good. But the Bengals regressed in a loss to Miami last week, so it is a toss em. It would be tempting to take Cam Newton and the Panthers over the Niners – except the game is in San Francisco. Donkos should take care of the inconsistent Bolts.

Also, why the Lions will beat da Bears: After seeing what she did to Matthew Stafford, the Kittehs have signed Bridget the Cat at Defensive back.

Well, there you have it. Talk some trash people!